Loyal to the Royals 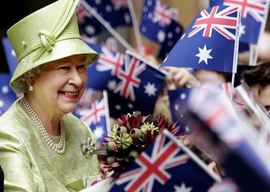 You would have to possess a heart of granite not to have been moved or delighted by the royal nuptials in London. Great Britain may be an island now largely populated by the fat and the feckless, but we still manage to put on a pretty good show. And once again the skeptics and anti-monarchistes, the cramped and brittle souls of the left, stand confounded and outmaneuvered. They cannot quite believe that we like things as they are. They refuse to accept the public’s abiding affection for our system’s pomp, circumstance, and colorfully historical quirks. The world watches and wants more.

So the flags are stowed for another day, the horse dung removed, and the carriages sent back to their mews, and the country returns to politics and debt. But Wills and Kate’s wedding was a reminder. In a thousand-year-old abbey they created a space and a magic that every country needs and for which most nations would sell their gold reserves. Call it trickery or frippery or mirage, call it overblown or absurd”you cannot call it meaningless.

Constitutional monarchy works. The Queen has sat on the throne every day of my life. The left would deem this undemocratic. Far from it. She has underpinned our democracy, has remained a symbol of duty, continuity, stability, and history, a repository of collective memory and national consciousness, a totem of identity. After all, her image has appeared on over two hundred billion postage stamps. It gives Britain influence and reach. It provides its citizens with a reassuring safety net. When Spain sloughed off decades of Franco’s dictatorship, it purposely reinstated the monarchy. Give me Elizabeth II any day over the pasty-faced mediocrities who pass as our politicians. She might not be flash or fashionable, but she sure as hell is class. And she is ours.

“The Queen is admired precisely because she resolutely stays herself and is not a faddist.”

Next year she will celebrate her Diamond Jubilee, marking 60 years in which Britain has retreated from empire, fought wars, suffered recessions, endured banking crises, joined the ridiculous European Union, seen the Soviet Union collapse, and witnessed a plethora of presidents and despots come and go throughout the world. Oh, and Osama bin Laden appeared and was only recently”and permanently”retired. Yet here, mercifully, a refined and thoroughly remarkable woman has ruled her island kingdom with dignity and grace. Quite some alternative to the Tony Blairs and Gordon Browns of this world.

Elizabethan, Regency, Georgian, Victorian, Edwardian”we measure history and ourselves through the eras of our kings and queens. To view royalty simply as a fairytale is absurd. For sure there are castles and pageantry, heroes and villains, the odd appearance of tragedy and darkness. And yes, there are even the two ugly sisters”in the shape of Eugenie and Beatrice”who look as though their frocks have been fired at them from a cannon. But there is more to it than a mere panoply of figures to either to boo or cheer. We have our favorites”Will and Kate, Harry, the Queen, and Phil the Greek”and the narrative is shaped and our views sharpened by press reporting. So Andrew is dull and boorish, Edward pompous and marginal, Charles peevish and strangulated, Anne kin to a peppery fox terrier. Then there is the Duke of Edinburgh”astonishing for a man of ninety”who can still raise an eyebrow and a laugh. Only he could approach an African dignitary resplendent in beaded cap and white flowing robes with the words: “I see you”re already dressed for bed, then.” God bless him.