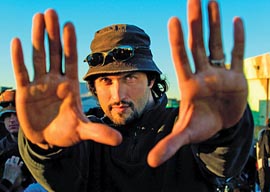 After the Euro-ennui of The American last week, Robert Rodriguez’s Machete sounded pretty entertaining: heroic illegal immigrants driving bouncing lowrider cars slaughter the evil white Americans holed up in a modern Alamo. Well, anything had to be better than waiting around for George Clooney to furrow his brow some more.

And Rodriguez, the junior varsity Quentin Tarantino, has a long list of sort-of-good movies to his name, such as Spy Kids and Sin City. Plus, Machete got even better reviews than The American did (72 percent thumbs up) and an enthusiastic 7.8 out of 10 rating from the fanboy raters at Internet Movie Database.

Because The American was, deservedly, the worst graded movie of the year (D-) in CinemaScore’s audience exit polls, there was much anticipatory schadenfreude among people who follow box office results that The American‘s second weekend revenue would plummet. And, it did. Yet, Machete‘s haul fell even faster, down 63 percent to only $4.2 million.

What happened? It’s an interesting question during a slow movie season because everybody recognizes that the gradual Mexicanization of America is a big deal statistically (there are 31 million people of Mexican origin in America). Yet few in America’s popular culture elite know much about Mexican-Americans, who may be even less common now in Hollywood than in the days of Anthony Quinn. Although there are three celebrated Mexican art house directors who moved to Hollywood after finding success in Mexico, the “Three Amigos,” the only big name filmmaker of representative Mexican-American background is Robert Rodriguez. (He’s from a San Antonio family of ten siblings.)

Rodriguez’s most notable talent is concocting ideas that build pre-release buzz among the Internet nerds who are the most vocal film fans these days.

Rodriguez teamed up with Tarantino to make the 2007 double feature Grindhouse, an homage to bad 1970s exploitation films. Machete started out as a fake trailer in Grindhouse about a cutlass-brandishing Mexican federale who leads illegal aliens in race war against Texas whites. Neither auteur has shown much skill at directing action, but Tarantino can frame compositions and write dialogue. Rodriguez’s most notable talent is concocting ideas that build pre-release buzz among the Internet nerds who are the most vocal film fans these days.

Rodriguez put his second cousin, Danny Trejo, a 66-year-old ex-con and longtime character actor, in the title role. Trejo, who does project a certain gravitas, looks like Charles Bronson in one of his American Indian roles, if Bronson had been saddled with Edward James Olmos’s dermatologist. Why hasn”t anybody before Rodriguez been enough of a genius to dream up making an ultra-violent action movie starring a spear-carrier older than Bronson was in Death Wish IV? I mean, other than that Old Penitentiary Face Trejo can”t move around so good anymore and never could actually act much?