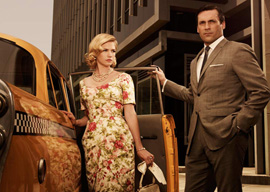 Television—thanks to the profit motive—is intensely imitative. If any type of show is successful, a horde will suddenly appear of usually lesser and shorter-lived knockoffs. In one season, the networks may be overwhelmed by alien invaders or ghosts, in another by “relevant” comedies. All such series are motivated by the hope of catching at least some overflow fans of this year’s plot du moment. The need for hits has become ever more desperate as the networks have lost ground to cable and now the Internet. Indicative of this desperation is the fact that the current “latch-on” show is itself a cable offering—AMC’s Mad Men.

Scheduled to start its fifth season next year, the series revolves around the adventures of a quintessential group of early 1960s types: advertising men based in New York City’s Madison Avenue. (Longtime readers of Mad magazine will remember how that immortal journal’s home street was always rendered as “MADison” Avenue.) Mad Men has become immensely popular during its run—especially among folk too young to remember the era. Hoping to cash in, ABC is offering Pan Am, featuring the adventures of that era’s quintessential figures, airline stewardesses (most definitely NOT “flight attendants”), and NBC gives us The Playboy Club, with yet another archetypal bunch, the Playboy Bunnies. These two series push the fact that their characters changed America, implying that we owe today’s perfection to them. But if they succeed, it will not be their alleged relevance that captures audiences, but the same retro factors that have made Mad Men so popular.

“Perhaps the era’s greatest crime was that it evolved into what followed it.”

But what are those? Why should the first half of the 1960s (as opposed to the second, so beloved of the baby boomers) command such attention from the same boomers’ children? Because, although still within the memory of many living (including myself, barely) it was, superficially at least, everything this era is not. Let’s zero in on a few points.

First, elegance. Before feminists burned their bras and hippies let it all hang out, anyone who aspired to anything wanted to look right. Jacket, tie, and hat for men; slip, skirt, high heels, makeup, and jewelry for women. Prior to the cult of dirt emerging from Haight-Ashbury, the truly cool wanted to “look like a million bucks,” even if they had nowhere near that in the bank. As with fashion, so with manners. Without a free-speech movement to tell them that foul language was liberating, anyone outside construction sites, barracks, and stag parties tried to keep their language clean. Do boomer parents’ surviving children make a concerted attempt to be elegant? Only in fits and starts; but they are often aware in a dim way that their progenitors’ grunge was a definite loss from something better.