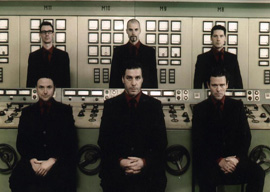 Rammstein’s “Mein Land” is the single from their recently released greatest-hits album, Made in Germany. It may be a first in recent history—a popular song which expresses right-wing sentiments. The song’s meaning has been debated among fans. Some claim that the song, which translates to “My Country,” is a satire on xenophobia. This seems highly unlikely. Rather, I believe the song is a genuine statement of outrage against the Islamification of their native land, or at least against unchecked immigration which the natives never condoned.

Rammstein, famous for their ’90s hit “Du Hast,” is rare in that they have refused to sing in English to appeal to a broader Anglo audience. This has only heightened their appeal to international audiences. Their silly antics include releasing pornographic videos and dressing up in ghoulish costumes onstage. But they may have stumbled onto a very meaningful song which reflects a growing resentment in Germany and across Europe.

More so than in America, Germans are not free to express themselves if such expression is interpreted as inciting anger against foreigners. This explains why the song’s lyrics are cryptic and ambiguous. “Mein Land” could ultimately be proof that artistic expression and free speech cannot be repressed. Because Rammstein has to operate within such restrictive boundaries, they have been known to employ double entendres in order to touch upon taboo subject matter.

“It may be a first in recent history—a popular song which expresses right-wing sentiments.”

The verses of the song are a kind of call and answer:

Where are you going, where?
I’m going from North to West

The chorus is more straightforward:

This is sung in a tone which would indicate that the singer, Till Lindemann, is not particularly pleased that the individual in question is in his country. Others have noted that the Asiatic melodies insinuated into parts of the song are meant to indicate that the country’s invaders are Muslims.

Most political music tends to have a wimpy PC message. Metal’s subgenres lend themselves much better to right-wing sentiments than otherwise; however, most often this music is either apolitical or makes some illiterate attempt to convey a liberal message. This is why “Mein Land” is unique.

We live in times when a simple message such as the one in “Mein Land” has to be shrouded in obscurity merely to exist. But working within those confines, Rammstein have created an anti-immigration anthem. The band should take themselves more seriously because what they have created is something rather serious.