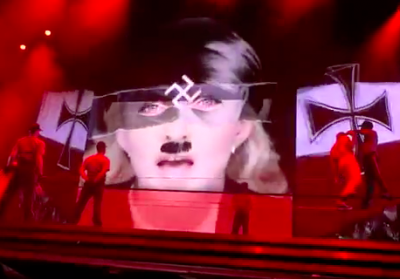 Always one to court controversy in lieu of talent, Madonna recently projected an enormous image of right-wing French politician Marine Le Pen with a swastika on her forehead Ã  la Charles Manson during her concert in Tel Aviv. It didn”t seem to matter that Le Pen is not a Nazi.

During the same concert, Madonna called for everyone to “rise above our egos and our titles and the names of our countries and names of our religions, if we can rise above all that, and treat everyone around us, every human being with dignity and respect, we will have peace.”

Too bad she didn”t use those principles during her two failed marriages.

Brandishing guns onstage in a “concert for peace” makes as much sense as going to war for peace. Oy vey! Kabbalah gone done fried your brain, Madge. Stick to boys and toys”politics isn”t your thang.

“All this intermingling of art and politics has me so irked and confused, I might start singing about it.”

Perhaps threatening to burn the stage on which Madonna performs is going too far, though not everyone would agree. Muslim extremists in Indonesia recently threatened violence until Lady Gaga canceled her show.

I doubt this incident will do much to persuade Gaga that not everyone in the world wants to accept sexual extremism. Gaga’s constituency doesn”t exactly “tolerate” religious or political extremism.

Poor Gaga can”t seem to catch a break. She subsequently managed to infuriate Thai authorities after Tweeting something about buying a counterfeit Rolex in Bangkok. Her record sales are down and Rihanna is blowing her out of the park with all kinds of incendiary yet apolitical booty-shaking. Watch and learn, Gaga! Sex without politics sells, too.

Maybe all this hubris will help Gaga see she should stop imitating Madonna, who doesn”t have half her talent, and start using some of that Juilliard-educated brain of hers to make some real effin” music. Right now she’s no more than a sellout in drag, which is a shame.