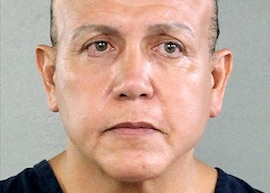 Amid the reams of personal information that have been released about MAGAbombing suspect Cesar Sayoc since his arrest on Friday, I have yet to find a word suggesting he’s ever had sex with a woman.

Then again, I haven’t found a word suggesting he’s ever had sex with a man, although he claimed to have worked as a male stripper and a Chippendale’s manager, and I assume you have to be gay to get (or even want) either job.

Last week’s biggest news story involved a series of crudely built pipe bombs, none of which detonated, mailed to Democratic and left-wing luminaries at a time suspiciously close to the midterm elections. At last count there were 13 such bombs linked to Sayoc. They all featured a return address of DEBBIE WASSERMAN SHULTZ [sic], the frizzy-haired, goat-faced Democratic super-yenta who used to represent the Florida district where Sayoc lived.

Again, no one was hurt if you don’t count feelings…and if you don’t count the GOP’s chances of retaining a majority in the House of Representatives in the upcoming midterms. Why, it’s almost as if this October Surprise had been staged to make Trump supporters look like the hateful, steroid-addled, violence-prone numskulls that all the mail-bomb targets had been saying they were all along. It’s almost as if this entire situation was just a smidge too perfect for it to have not been orchestrated by Democrat operatives.

But when Sayoc—a Trump supporter whose devotion to the president appeared to border on the psychotic—was arrested on Friday, all the usual yipping Chihuahuas started yelping that this is exactly the sort of catastrophe that the president’s violent rhetoric was intended to cause, and if there was only one thing that wasn’t predictable about Sayoc, it was that he wasn’t the “white man” that news reports initially claimed he was. If only they had found a white man to blame, this would have been what they’d been praying for all along.

“What seems to have completely escaped notice is how intensely squirrely this alleged Hate Bomber is.”

According to reports, Sayoc was an odd duck indeed. His cousin told a reporter that Sayoc’s father is Filipino and his mother was Italian. But none of this deterred the alleged bomber from repeatedly claiming to be a Seminole Injun. He allegedly owned companies called Native American Catering & Vending and Proud Native America One Low Price Dry Cleaning. On social media, he recently described himself as a member of the Seminole Warriors boxing club and the “Unconquered Seminole Tribe.” He told coworkers that he lived on an Indian reservation and had done work for the Seminole Hard Rock Hotel and Casino. But a spokes-Injun for the Seminole Tribe of Florida said he had no record of Sayoc belonging to the tribe.

Sayoc had a long rap sheet dating back to 1991. He was charged in Minnesota with possessing crack cocaine. Most notably, his record included a 2002 arrest for threatening to bomb Florida Power and Light if they dared to shut off his power due to unpaid bills. According to Miami police, he personally threatened an employee and told him that the bombing would be “worse than September 11.” In 2004 he was charged with several felony counts of unlawful possession of anabolic steroids. Then came a 2013 conviction for battery and a conviction the next year for battery. He has also been arrested for fraud and evidence-tampering.

He filed for bankruptcy in 2012 at age 50 while still living with his mommy. At some point thereafter his mother kicked him out, and Sayoc apparently has been living out of a white van for the past few years. Until this past January he found work as a pizza delivery boy, an unflattering job for any man in his 50s.

According to Debra Gureghian, his lesbian boss at the pizza joint, Sayoc used to tell her that she should be “put on an island with all the other gay people and burned”:

He used to tell me all the time that I was deformed and Jesus made a mistake in me… He was very angry and angry at the world, at blacks, Jews, gays. He always talked about ‘if I had complete autonomy none of these gays or these blacks would survive.’… He was very, very strange.

Gureghian also says that while employed as a pizza delivery guy, Sayoc’s van was plastered with horrific bumper stickers:

She says that Sayoc’s bosses tolerated all this because he was a good worker, although they demanded he park his Hate Van away from customers’ view while delivering pizzas.

At some point over the past year, the Klan and lynching tableau on Sayoc’s van gave way to more explicitly pro-Trump and anti-Democrat bumper stickers. Every available inch of his van’s exterior was spackled with violent imagery featuring rifle crosshairs placed over the faces of people such as Barack Obama, Michael Moore, and Hillary Clinton. Another sticker said “CNN SUCKS.” Yet another showed Trump standing atop a tank while a bomb was exploding in the background.

All of this makes him seem like either a demented Trump supporter or a mindless patsy for anti-Trump forces. One thing is for certain—the story completely deflected attention away from the ominous brown human caravan headed to the USA from points south, a story that was working in Trump’s favor.

Yet what seems to have completely escaped notice is how intensely squirrely this alleged Hate Bomber is. He was a habitual steroid abuser so obsessed with youth and appearance, one of his criminal charges involved forging a driver’s license to make himself appear younger. And even though the Chippendale’s company denies that Sayoc ever danced for them, who but a delusional gay man would claim to be a Chippendale? Sayoc reportedly was known at the local LA Fitness for showering nude all day but never working out. And whereas a 2002 mug shot shows that he was severely balding, his recent arrest photo makes it appear as if he’s had hair either Sharpied or tattooed onto the top of his head.

Most heterosexuals seem to harbor some level of distaste for gays, whether or not they articulate it. But if Sayoc’s lesbian pizza boss was telling the truth, his calls for outright gay extermination bear the hysterical fervor of someone who desperately wants to burn his Inner Fag at the stake.

These are not the actions of a rabid Trump supporter. Neither are these the actions of at least the majority of paid government stooges. Rather, these are the actions of a repressed homosexual on steroids who is losing his looks and throws a hissy-fit because he realizes he will never, ever, EVER be a Chippendale’s dancer.

If I encounter the merest squib of evidence that Sayoc has ever had sexual relations with a woman—or even so much as lived with another woman besides his mommy—I may change my mind. For now, this is the funniest theory about the botched pipe bombs—which were, mind you, phallic in shape—that has yet occurred to me.