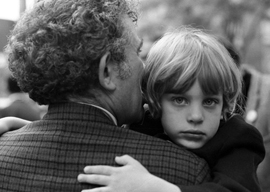 My father, Norman Mailer, once wrote that film exists somewhere between memory and dream. We recall a film—a good film—the way we recall our memories: fragments crystallized in our minds as visuals of a dream (or a nightmare), points of light dredged up from our subconscious.

I experienced my first taste of filmmaking when I was five years old. I was unwittingly a glorified extra—a “day player” in showbiz parlance—and had my debut as a witness to my father’s near-death at the murderous hands of Rip Torn. The film was Maidstone, my dad’s third and final attempt at underground filmmaking—cinéma vérité style—in the late sixties.

“I can’t help but look at Maidstone—when I can look at it all objectively—as a testament to why the sixties ultimately imploded. The movie embodies indulgence to the point of mental hazard.”

The cast was comprised of friends, ex-wives, athletes, and movie stars, with a few gangsters thrown in for good measure portraying some warped and far-out version of themselves—persona extensions on steroids, if you will. They were summoned to Gardiners Island—a bucolic piece of land somewhere off the Hamptons’ coast—to vow their allegiance or disaffection toward a certain Norman T. Kingsley (portrayed by whom else), a retired porn director running for president of the United States. Why not, after all? Qualifications for higher office being what they are, you might argue that it was a prescient conceit. Those who arrived immediately drew tags from a hat identifying whether they became the candidate’s friend or foe. Though technically neither knew the other’s position, over three strenuous days the cast would exercise their voices, feelings, prerogatives, and in one case an assassin’s impulse.

And like those stories you hear of people being invited to spend a weekend in jail—some as jailbirds, others as the jailers—who take to their role with psychotic zeal, so too did Gardiners’ denizens act out their respective parts with manic intensity. I can’t help but look at Maidstone—when I can look at it all objectively—as a testament to why the sixties ultimately imploded. The movie embodies indulgence to the point of mental hazard. And yet the film stands the test of time as a sociological statement.

Cutting to yours truly: For some reason in the midst of the film’s preparation, one or both parents decided it was a good idea to bring the family along. So into the vortex trotted my older sisters—Danielle, Elizabeth, and Kate—my younger brother Stephen, and myself. We soon found ourselves unwittingly part of the cast, filmed as cherubs wandering through the island’s fields. But that’s where the idyll ended.