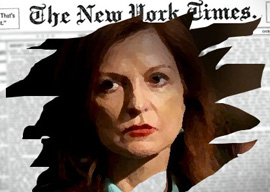 New Year’s resolutions work only for bores and ambulance-chasing, money-grubbing lawyers. Normal people do not and cannot stick to them. Hence I will list for you my irritants of 2013, hoping against hope that they”ll disappear, but I don”t advise any Taki’s Mag reader to hold his breath.

Bill Maher. His political correctness aside, he has a repulsive face, a nose that closely resembles a penis, and a mind so fine that no original idea could violate it. Maher fancies himself a writer, but in reality he has a large retinue of writers who scribble the stuff he presents as his own. He’s as phony as they come but I love looking at him because by comparison he makes me feel like Apollo, Adonis, and Paris of Troy combined. Maher hates conservatives, Christians, heterosexuals, and people who don’t smoke dope. He went weak at the knees when Christopher Hitchens was in proximity. Come out, come out Bill Maher, all is forgiven, and you could marry Andrew Sullivan (who likes it bareback).

“In olden days they would have been sent to a leper colony. Now they appear on TV.”

Gay marriage. Many good friends of mine are homos, and the last thing they desire is same-sex marriage. That’s why they like the word “gay” rather than “queer.” They are swingers, not homebodies. The patrimony of the United States consists of values and traditions, and same-sex marriage ain”t one of them. I am not homophobic and I support civil partnerships, but I find it a crime for politicians and busybodies to have the effrontery to redefine an institution such as marriage, which has been upheld since time immemorial.

David Frum, Bill Kristol, and John Podhoretz. In their infinite wisdom, the ancient Greeks mistrusted very ugly people. These three neocons exemplify mistrust. All three are fat and shrill and hysterical and need to wear makeup when out and about; otherwise, horses might bolt. In olden days they would have been sent to a leper colony. Now they appear on TV.

Maureen Dowd. The female version of the three stooges mentioned above, she is as politically correct as they come. She keeps reminding us that she was born a pleb. Gee whiz, Mo, did you think any of us ever mistook you for anything but a lowlife? La Dowd was in ecstasy when Romney bit the dust. A lot of people were, but she went on for days writing how the next time we will have more gays, more blacks, more Hispanics, and more women, making sure no white guy is ever president again. Is that what they mean when they call this kind of hysteria penis envy?

Africa. I am rather tired of having people raise money for Africa. The bloodiest continent of all, it has immense mineral wealth and lies in the midst of fertile land and favorable climate, yet the poverty is endemic, its leaders psychopathic murderers, and its only hope is that the white man stay away and let them sort their problems out or recolonize the place and build schools and hospitals and teach them some manners.