Make Your Own Damned Lunch 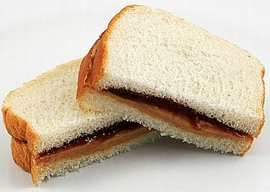 There’s currently a guilt-inducing ad campaign on the NYC subway featuring a large cup of coffee next to rows and rows of sandwiches: “For the price of one latte,” it says, “you could provide 25 school lunches.” Your first instinct as a non-poor person is to think, “What a piece of shit I am, drinking this coffee and taking food out of starving children’s mouths.” Then you take a step back and do the math. “Wait a minute,” you say to yourself, “a month of sandwiches only costs a cup of coffee? Why did these people have a kid if they can’t put aside a coffee cup’s worth of money a month in order to feed them?”

The ad is referring to Bloomberg’s school-lunch subsidy at a quarter per meal. In September 2008, Bloomberg joined hands with Harry Truman’s corpse and decided that all public-school kids deserved a free lunch. Who could argue with that? It works well at his financial headquarters. The mayor’s relentless ego keeps reminding us that the city is its own nation and he is our president. He even told some students at MIT a couple of nights ago that the NYPD is his own personal army. So why not take over as the city’s mommy?

“Judging by the size of the moms’ asses at my daughter’s public school, these women are hardly starving.”

His policy is simple: Poor kids get free lunches at school, slightly poor people have to pay a quarter, and the cream of the working class can get lunch for $1.50. This nanny-state plan has been an abject failure, as many parents have gone for a third option: Forget about filling out the qualification forms and simply grab a free lunch. This has left the taxpayer to foot a dine-and-dash bill that hit $7 million last year and left the mayor no choice but to suggest canceling the program with scary threats such as, “We want to keep this between the families and the schools and we don’t want to use collection agencies.” Another glaringly obvious problem with his idiotic plan is that most parents aren’t even bothering to use it possibly because, as his own news agency reports, the meals aren’t even that healthy.

None of this should even be an issue, because if there’s one thing that’s cheaper than food, it’s good food. I had no idea sandwiches were so cheap until Bloomberg’s ad accidentally spelled it all out. Upon a bit of research, it appears even charging $1.50 for lunch is rich.