Making Sense and Nonsense of the Riots 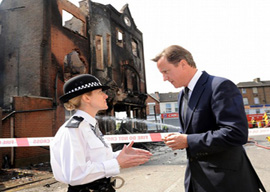 It all started, says Darcus Howe, as

an insurrection of a generation of poor, primarily, black people from the Caribbean and from Africa.

Then it raced like a savannah fire from its Tottenham flashpoint to other areas of London and cities including Manchester, Birmingham, Leeds, Nottingham, and Luton. The racial ramifications became partially subsumed within a wider outlawry in which the political became personal and the personal a pretext for profiteering. Suddenly, it was not only the Wretched of the Earth who needed to be liberated, but also plasma TVs and the personal possessions of Malaysian students plucked by their “rescuers.”

Police were shot at in Birmingham, and five people died elsewhere—including three Asian men mown down by a car outside shops they were guarding. A 68-year-old man died later of injuries suffered when he was attacked for trying to extinguish a fire in Ealing—as did another man shot in Croydon on the Surreymost edge of London.

After riots always come reactions, then reactions to the reactions—a concatenation of vignettes and vindications, anecdotes and alibis, urban myths and scapegoats, dividing along predictable political lines.

The dependably disgusted right demanded to know why dum-dums weren’t deployed against the dumb-dumbs, while Max Hastings wrote hyperbolically in the Daily Mail:

They are essentially wild beasts…My dogs are better behaved and subscribe to a higher code of values than the young rioters of Tottenham, Hackney, Clapham and Birmingham.

Meanwhile, the always outraged left felt mayhem and even murder must be seen in the context of Conservative cuts.

“After riots always come reactions, then reactions to the reactions—a concatenation of vignettes and vindications, anecdotes and alibis, urban myths and scapegoats, dividing along predictable political lines.”

The World Socialists are in the running for the Most Fatuous Comment Award:

The bourgeoisie is aware that it has entered a second stage in the global crisis of capitalism that will exacerbate the class divisions already exposed across Europe, the Middle East and internationally….

How odd so few other observers have discerned this cross-frontier classist conspiracy against the workers! Admittedly, it takes advanced dialectical skills to see the rioters as being workers, considering that none of them seem to have been employed.

The Tories…are parading around the country spouting bigotry and trying to shift the blame for what’s wrong onto ordinary people.

Among those striving to realize international workers’ solidarity was a 17-year-old from Suffolk who issued an impassioned Facebook war cry:

I think we should start rioting…come on rioters.

It has to be said that this is not one of the great calls to arms, but at any rate no one hearkened to the pimpled Proudhon.

Nor did the benighted bourgeoisie of Northwich, Cheshire opt to “Smash down in Northwich Town,” notwithstanding detailed Facebook instructions from one of the town’s more towering thinkers to meet “behind maccies [the local McDonald’s] to get this kickin’ off all over.”

Nor yet did the revanchist residents in that Stalingrad of Gloucestershire—Bream, Forest of Dean—who clearly do not feel quite as strongly about the local Spar store as the 19-year-old who suggested they might think about attacking it.