Making Sense of Obama: The Muslimist 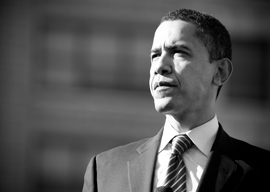 Who is the real Barack Obama?

It’s an odd question to ask about an incumbent president less than a week before he’s up for reelection. It’s an especially strange inquiry to make of a president as self-obsessed and introspectively voluble as Obama.

Yet Obama has been the subject of so much fantasizing (not least by Obama himself) that the actual man remains occluded.

A simple explanation of Obama’s strengths and weaknesses has finally occurred to me.

The first two-dozen years of Obama’s life saw him on a path for a professional niche that nobody has quite explicated before. Until he upped stakes and moved to Chicago in 1985 to participate in the Council Wars racial struggle with the implausible goal of becoming mayor of Chicago, Obama was gliding down an unusual path: to become an international interlocutor, a graceful go-between connecting America and the Muslim world.

In the classic 1974 science-fiction novel The Mote in God’s Eye by Larry Niven and Jerry Pournelle, humanity comes into contact with an alien race whose ambassadors are articulate, elegant, and empathetic. They can listen to a human’s stumbling explanation of his wants and repeat it back to him more deftly than he did. Only slowly do the humans grasp that these polite, likable envoys are merely one caste among the aliens, a special breed called the “mediators.”

Here on planet Earth, international intermediaries are not yet bred to specification. Still, area experts and emissaries tend to emerge from certain backgrounds, classes, and personality types.

In American history, Foreign Service specialists are often the mild-mannered descendants of adventuresome old Protestants who became bored with their rocky Northeastern farms, such as the Yankee sea captains, merchants, and Protestant missionaries who dominated 19th-century America’s contacts with less developed cultures abroad such as the Kingdom of Hawaii.

“Obama has been the subject of so much fantasizing (not least by Obama himself) that the actual man remains occluded.”

In 1971, the ten-year-old Barack Obama enrolled in Punahou School, Hawaii’s flagship of Yankee culture. Punahou had been founded 130 years before by the Vermont missionary Hiram Bingham I. Upon Bingham, James Michener had modeled his villain, the Rev. Abner Hale, in his 1959 bestseller Hawaii.

As Obama notes in his stump speeches, the Dunhams were from Kansas, but from a particularly Yankee-leaning part of the Jayhawk State. For instance, his grandfather’s brother Ralph, a Berkeley Ph.D., traced his name back to that ultimate Unitarian, Ralph Waldo Emerson. (The president’s grandmother also had a sibling who earned a doctorate.)

In American history, the two most controversial castes of missionary-derived mandarins were the Old China Hands and the Arabists.

The former were typically sons of Protestant missionaries born or raised in China, such as Owen Lattimore, John Paton Davies, Jr., and John S. Service. The left-leaning diplomatic, academic, and journalistic China Hands clashed with the right-leaning China Lobby in the 1940s and 1950s over whether American should back Mao Tse-tung or Chiang Kai-shek. Was Chiang a loser or was Mao a lunatic? (Unfortunately, it turned out that both could be true simultaneously.)

Similarly, as outlined in Robert D. Kaplan’s 1995 book The Arabists: The Romance of an American Elite, Protestant missionaries from the Atlantic Seaboard voyaged to the Arab world in the 19th century. They didn”t have much luck converting the locals to Protestantism. (Obama’s Columbia professor Edward Said was a rare Arab Protestant.) But these intermarried families founded influential schools such as the American University of Beirut.

The Arabists played an influential role in American foreign policy until largely being squeezed out by Zionists angered with Arabists” sympathy for the Palestinians.

Much of the Muslim world, however, is not Arab”for example, Indonesia, Pakistan, and large parts of black Africa. And that opened up a potential career path not as an Arabist per se, but as a “Muslimist.” The Muslimist route became especially promising in 1973 with the Muslim-dominated OPEC’s emergence as an economic power. The oil cartel included not only Saudi Arabia, the Emirates, Libya, and Iran, but also Indonesia and part-Muslim Nigeria.