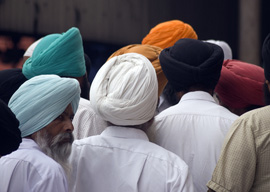 American media coverage of the Wisconsin Sikh temple shooting often included primers on Sikhism, sidebars that would be considered superfluous up here in Canada.

Though estimates vary wildly, both countries appear to have similar numbers of Sikhs (Canada’s half-million v. 750,000 in the US), but America’s total population is nearly ten times greater. Turbaned bearded men aren’t an uncommon sight in the Great White North, be they cabbies or Cabinet ministers.

That’s not to say they are universally beloved.

American Sikhs may quietly come to thank their gurus that they were shoved into the nation’s consciousness by a crime where they were the unambiguous victims.

When the largest mass murder in Canadian history occurred in 1985, Sikhs were the perps. That incident, along with many minor ones, has ensured that Sikhs ranked second only to Muslims in a national poll measuring negative attitudes toward different faiths.

“When the largest mass murder in Canadian history occurred in 1985, Sikhs were the perps.”

On June 23, 1985, more than 300 passengers”280 of them Canadian”died when Air India Flight 182 out of Montreal exploded over Irish airspace. The Canadian Sikh terrorists responsible called it revenge for the Indian government’s attack on the Golden Temple the previous year. Considered Sikhism’s holiest shrine, the Golden Temple was being occupied by extremists when President Indira Gandhi sent in the army, leaving over 500 dead. Gandhi’s Sikh bodyguards assassinated her in October 1984.

The latest inquiry concluded in 2010 that”wouldn’t you know it?”it was all our fault. You see, a “‘cascading series of errors’ by the government of Canada, the Royal Canadian Mounted Police (RCMP), and the Canadian Security Intelligence Service (CSIS) had allowed the terrorist attack to take place.”

That’s not even “blaming the victim.” That’s blaming the bouncer, the bartender, and the janitor at the tavern where the rapist met his prey.

To say that Flight 182 left previously neutral Canadians with a poor impression of Sikhs is an understatement. Hostility toward them increased further because instead of issuing humble apologies then adopting a temporarily low profile, many Sikhs weirdly grasped the opportunity to push their luck.

That sounds like a suicidal strategy. So naturally, this being liberal, self-loathing Canada, it worked beautifully. Annual Sikh parades celebrate convicted mass murderers whose photos have pride of place in some Canadian gurdwaras (where stabbings occur with troubling regularity).