Male Bonding at an All-Female College 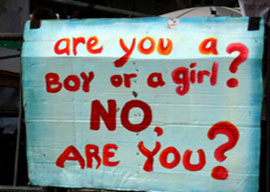 A group of biologically female good ol” boys gathers every week at Oakland’s girls-only Mills College to discuss how oppressed they feel by gender-specific pronouns.

These dudes call the group Mouthing Off!, and every week’s session begins with the boys going around in a circle and solemnly declaring which personal pronoun the other guys in the room should use should they be so bold as to refer to them in the third person.

Down to every last man, participants identify as “genderqueer””meaning they are made supremely uncomfortable when someone refers to him as “she” or “her,” even when the recipient of the unwanted personal pronoun technically looks like a female, sounds like a female, has a female’s name, attends a school that permits entrance only to females, and is waddling around in a body that any simple DNA test would conclude is 100% biologically female. Or if they are especially sensitive and still are uncomfortable or even pained by the term “genderqueer,” he may choose an alternative such as agender, gender-fluid, bi-gender, or third gender.

“When we wind up killing one another for food, no one’s going to care about gender-nonspecific personal pronouns.”

A 19-year-old named Skylar Crownover is the president of Mouthing Off!, and because Skylar wants to be addressed as “he,” I will make an exception and refer to her as a chick until I receive DNA evidence that she’s a male. Otherwise, we”re talking about a bunch of dudebros”and judging from the pictures I”ve seen, these are all dudebros. Not a homie in the bunch, if you catch my drift.

When they aren”t ready to claw one another’s eyes out over semantic quibbles, many such wealthy and privileged white males in the genderqueer “community” prefer to be referred to with the third-person and gender-neutral “they.” Others want you to call them “ze” or “sie.” Others are even more maladjusted and insist you use even more fanciful pronouns. Some stud who calls himself “s. e. smith” wants to be referred to as “ou.” (Although as far as I can tell he is not a member of Mouthing Off!, he and the group are obviously brothers in arms.)

Sweden is in the midst of shoving the previously gender-specific terms han (him) and hon (her) into the same big genderless henhouse.

I”d wager that if offered government jobs or government aid, all of these blokes would immediately become women again. They sure didn”t mind using their vaginas to get into their all-girls” college.

Mel Goodwin is the youth program director at the gay and lesbian community center in Las Vegas”no comment, I”ll just let that hang out there all by itself for a second”and he claimed “they” as his own personal pronoun four years ago. In other words, he doesn”t want you to refer to him as “him.” Sucks to be him.