Man Bites Dog, but Nobody Cares 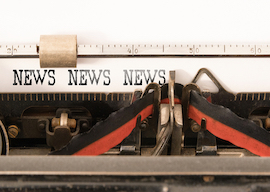 DALLAS—So yesterday there was a headline in my newsfeed:

It was the 85th link in my newsfeed, so I assumed it was some kind of advertising come-on for cold medications. It was actually an article by the Beauty and Style Editor for Yahoo reporting on research at Stanford and the University of California that has identified the single protein that allows the common cold to flourish, regardless of which rhinovirus caused the cold in the first place. All you have to do is neutralize that protein and the cold goes away.

So apparently scientists think they have cured the common cold! The headline once used as an example of “This could never happen, so if it did, it would be huge,” actually happened.

So my question is, how is it not screaming across the top of The New York Times in 96-point Bodoni Bold?

Isn’t this one of those “probably not in our lifetime” miracle stories?

(2) Aubrey O’Day complaining that an American Airlines flight attendant made her change her shirt in front of her fellow passengers.

(3) An analysis of the low fertility rate in Japan.

(4) An investigation of subpar jalapeños in Subway sandwiches.

(5) A Metallica tour update after James Hetfield went to rehab.

(6) Stormy Daniels’ settlement for false arrest at a strip club in Ohio.

(11) Speculation about moon travel and the ability of the moon to support a colony.

“The original purpose of a newspaper has been turned into its opposite: We don’t know what the hell is important, so YOU DECIDE!”

And last but not least:

(13) Several articles on a heated Twitter discussion about whether Kristin Cavallari is too skinny, based on images she posted from a Mexico photo shoot.

Then there are all the weird “disappearing drama” stories—video of warehouse fires in faraway cities, car chases photographed by helicopter that continue for a while then vanish, and news bulletins about random homicides wherever they occur. I can’t remember a time when news editors have been so confident that people in Pittsburgh will be engrossed by the minutiae of violent events in Fresno, but apparently we’re in an era not just of hyper-local reporting, but of hyper-local reporting for export. If a city councilwoman in Spokane, Washington, wants to ban e-cigarettes, be assured you can read about it or watch her on video from your condo in Naples, Florida.

If you ask the people who own the newsfeeds about this phenomenon, they’ll point to research showing that the average citizen tends to watch the same type of content over and over again, therefore they feed it to them in advance for their convenience. This is a fiction; in fact, they feed it to them in advance to try to sell more advertising based on how many minutes you spend on that newsfeed and how many times you click through.

The only problem with this consumer-oriented approach is that it assumes that a revolution in, say, Panama, is of no interest unless you watched the previous 347 videos about Panama. Anything that rises to the level of “news” in your brain—meaning you’ve never thought of it before, heard of it before, known about it before—is actually excluded from anything Facebook or Google or Microsoft would send you in a so-called “newsfeed.” And if you happened to purchase, say, panty hose yesterday, the “newsfeeds” will assume you want to read about new underwear microfiber products available in Italy but will not tell you that, because of an incident in Yemen, Iran and the United States are now on the brink of war.

In other words, the original purpose of a newspaper—to organize all the events of the world in order of importance, using fonts, type sizes, headlines, and other conventions to indicate relative importance—has been turned into its opposite: We don’t know what the hell is important, so YOU DECIDE!

I’ve gotta think curing the common cold should be way up there in importance even if I don’t regularly do searches on cold products. When they’re sifting through the ruins of bodies frozen in place from nuclear irradiation, they’ll find a whole lot of people who were checking their newsfeed right as it was happening. They’ll know all about Beyoncé’s next album.