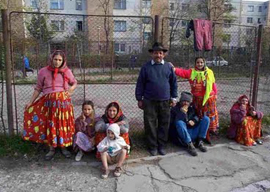 Here is an old Soviet-era joke, from the subgenre in which dimwitted peasant Khruschev plays Costello to smart seminarian Stalin’s Abbott.

Stalin and Khruschev are touring the East European satellites in Stalin’s personal locomotive.

They are sitting in the carriage chugging along when Khruschev leans over to Stalin and says: “Comrade Yosif Vissarionovich, help me please. I never know which one of these countries is which. Where are we now?”

Khruschev, looking at his watch: “Ten AM.”

Stalin: “Well then, according to the schedule this must be Czechoslovakia.”

Time passes. Again they are back in the carriage chugging along. Again Khruschev asks Stalin: “Where are we now?”

Stalin: “Then this is Hungary.”

More time passes. Again Khruschev leans over to Stalin: “I’m sorry to be a nuisance, Comrade, but I’ve lost track again. Which country are we in now?”

Khruschev pulls back his sleeve to check the time. “My watch! It’s gone!”

Stalin: “Ah, then this must be Romania.”

This joke is a slur on the noble Romanian people, whose hospitality I once briefly enjoyed. My wife also reminds me that her first dentist in the USA was Romanian, and a very fine dentist he was and apparently still is. The stereotype of Romanians as a nation of thieves is, ethnic Romanians are not shy to tell you, the fault of the Gypsies, who are especially numerous in that neck of the woods.

“The concept of national character may be making a comeback, at least in Europe.”

Here I must insert the usual disclaimer for the benefit of readers too feeble-minded to grasp sophisticated mathematical concepts such as “average” and “variation.” I am sure”I have no doubt whatsoever“that there are many worthy and talented persons of the Gypsy ethnicity.

Gypsies in the generality, however, are bad news, working as little as they can while stealing as much as they can. Romanian Gypsies seem to embody the negative side of Gypsyhood in a particularly concentrated form. In Britain, to which they have had some limited access since Romania joined the European Union in 2007, they have specialized in stealing entire houses while the homeowners were on vacation.

(“Anti-racist” hysteria has reached totalitarian levels over there, so the fact of the thieves being Gypsies is rarely mentioned. If you talk to British people, however, you will learn that, as the Brits say, “even the dogs in the street know it.”)

At the beginning of next year, just nine months from now, that limited access becomes unlimited. Romanian Gypsies will then be just as British as the British, or at least as British Gypsies.

Except that they won’t. I lived for 35 years in Britain and don’t recall any news stories about Britons”no, not even British Gypsies”stealing the houses of vacationing fellow citizens. The “squatting” phenomenon has been around for a while, but it targets abandoned or long-unoccupied buildings.

I am speaking here of human group characteristics at the ethnic or national level. Although a deeply unfashionable topic nowadays, peculiarities of national character used to supply much of our humor, from Shakespeare’s comic Welshmen to late-20th-century Polish jokes. National Lampoon did a fine compendium of the underlying stereotypes at about the last moment when it was possible to do so without being hauled off to the Ministry of Love for interrogation.