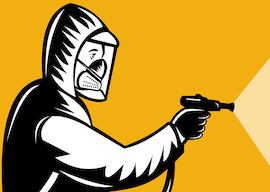 I am an admirer of ratcatchers; in my experience, they respect their enemies and love their work. I have never met a bored ratcatcher, or one who gave the impression that he wished he was doing something else. They are always knowledgeable in the ways of the Rat, and since the Rat is cunning, they have always to use their intelligence to the full to outwit him. They have many stories to tell. There is no final victory over the Rat—though he may one day win a victory over us.

Once we had a dead rat under the floorboards of our dining room. I would not have credited that so small a creature could cause such a smell. It was intolerable. We called the municipal ratcatcher and in those days he was a genuine public servant, that is to say a servant of the public. He came straightaway, and one knew at once that he was competent, that he knew what he was talking about (economists and financial advisers rarely give this impression, at least to me). He told us that to find the culprit and remove it he would have to lift the floorboards, which would be a great nuisance to us; alternatively, we could put up with the smell for six weeks and then it would go. We chose the latter.

The municipal ratcatcher was absolutely accurate in his prediction. He knew his rats, dead or alive. After six weeks, the smell disappeared as suddenly as it had started. It was worth the dead-rat smell to encounter disinterested human knowledge and competence.

Twice a year we have a pest controller to our house in France. Since the house is isolated in the countryside, there are many pests to guard against: wasps, hornets, mice, rats, ants, termites. We have had weasels under the roof. Bats and bees are not strictly pests, indeed they are useful and even essential. Bats keep the insects down and one grows rather fond of them, but they do make a mess. Sometimes bees build their hives between our shutters and the windows, and last year we had a hive of 30,000 bees. This allowed me to observe what I had not seen before, the famous dance of the bees, and to wonder or marvel at the beauty of their construction. Bees have infinitely better taste than modern architects. It took a day for an apiarist to remove the hive; for necessary as bees are, it is uncomfortable to have 30,000 of them in one’s house. The apiarist, whose skill it was also a pleasure to witness, preserved them carefully and gave us some of the honey in return, which was of acacia flowers; it was of quite a different quality from any I had tasted before.

“There are few sensations more unpleasant than moths flying about while you are in bed and getting under the bedclothes.”

For the past two years we have had a new pest, Cydalima perspectalis, the box tree moth. Like everything else these days, it was imported from China. Individually, this moth is rather beautiful, cream-colored with wings edged with gold, but thousands of them in your bedroom is far too much of a good thing. There are few sensations more unpleasant than moths flying about while you are in bed and getting under the bedclothes.

You can control, though not eliminate, the moth by means of solutions of nematode worms or bacteria sprayed on box tree leaves (the moth’s diet of choice), or by pheromone traps that attract the insects and sterilize them. The knowledge and human ingenuity behind these methods is admirable, though no doubt it was the ingenuity of globalization that caused the problem in the first place. Such is the Promethean bargain: Once you start inventing, you have to invent ever more to undo the ill effects of your previous inventions.

Admirable as is Man’s ingenuity, amazing also is his foolishness. Our pest controller told us that in the past few weeks he had been called three times to a school because a wasps’ nest had formed on a window shutter. We have these wasps’ nests on our shutters too; they are small, not more than an inch across, and all you have to do is sweep them off with some kind of instrument to the ground outside. It takes not more than a second and is not in the slightest hazardous to do.

But the whole school was paralyzed three times in succession by the nests. A tape barrier was placed round them like a police barrier placed round the site of a murder: DO NOT CROSS. The pest controller pointed out that wasps have wings and do not necessarily respect such barriers, but his comment was not much appreciated.

The teacher who first noticed the nest had called the head teacher who had called an educational bureaucrat who had called a more senior bureaucrat, who had decided that sweeping away the nest was a job for a professional pest controller. He duly arrived, swept the nest away with a brief flick of a brush. For this service, he charged $100, repeated on two successive occasions. I suppose that the $300 (so far) counts as money spent on education, though no one seems to have learned anything from it.

The aversion to risk even when there isn’t any is a mark of modern society. It is aversion not to risk, but to metarisk, as it were: the risk of a risk. This is both hilarious and grave at the same time. The pest controller—far more intelligent than most educational bureaucrats—wondered what would happen if the school ever had to face a real emergency. The staff were so unused to taking decisions for themselves that they would probably be paralyzed by indecision. The only decision of which they were now capable was the decision not to take a decision. Human agency is a faculty that has to be exercised or it withers, to be replaced by paralysis followed by obedience to protocol.

What pest control will rid us of this foolishness? What nematode, what bacterium, what pheromone? I fear that nothing will, except catastrophe, and while catastrophe is exciting to imagine and to view on the cinema screen, it is not so good to experience. The Habsburg Austrians used to say that the situation was catastrophic but not serious; we might with justice say that our bureaucracy is busy but redundant.