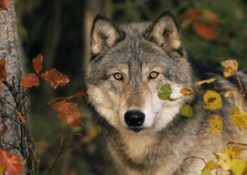 I don”t know if you remember this but about 40,000 years ago, after we stopped looking like a redhead with cranial dysphasia and settled on homo floresiensis, we had a true best friend. His name was the Gray Wolf and we had a healthy relationship that involved working together, sort of playing together, and ultimately, keeping a safe distance.

Wolves are a tricky bunch. Like prisoners, they devote their lives to constantly fighting the top dog in the hopes they too may become king. If you were to try to domesticate a wolf today, he would be constantly waiting for you to trip up so he could attack you and take over your position as husband and father of the household. This is of course, very rare and the one time it did happen a local hunter chopped the wolf’s head off and reunited the grandmother with her red-hooded granddaughter.

Back in hunter-gatherer days, wolves noticed that we were incredibly adept trackers and if they followed us on a hunt, they tended to get some pretty good scraps. They were the first mammal parasites and we enjoyed their company the way an alligator likes one of those cleaning birds that sits on his back eating bad parasites. Wolves often helped us take down a particularly ornery beast and would even warn us of imminent danger. Eventually, they started living close to the cave and the relationship went from acquaintances to best friend. This is all perfectly fine and a great example of man living in harmony with nature.

So how did we get here: A place where lonely spinsters personify genetic mutants and follow him around cradling his shit in plastic bags and hoping he’s not in a bad mood? Animal Rights activists are very adamant about treating dogs kindly and making sure they get enough exercise etc. but why doesn”t anyone notice how severely we have mutilated our old buddy, the wolf?

Wolves eat about once every two weeks depending on availability and as I said before, they don”t really like you. Cut to fifteen thousand years of breeding and we have an animal that will eat itself to death if you let it and loves anyone who feeds it unconditionally.

“How many Sex and the City fans have funneled all their maternal instincts into their Chinese bulldog without even noticing their ovaries have expired?”

We have bastardized the species. A Basset Hound isn”t a Basset Hound. It’s a deformed congenital dwarf, literally. Bulldogs have been bred with heads so big, they can no longer give birth to their own offspring. If a vet doesn”t give it a cesarean, it’s dead. German Shepherds are bred with such broad shoulders and greyhounds have such spindly legs both die early from dysphasia. Spaniels” skulls are now too small for their brains and tens of thousands of them suffer a life of insanity-inducing migraines. Dobermans often bleed to death because we”ve made their blood unable to clot. We”ve also cursed these creatures with retinal atrophy, deafness, and epilepsy, diseases unheard of in their wolf brethren. In Britain (the dog lover capital of the world) breeders were creating wiener dogs that were so long, they couldn”t even hold up their own spine! The government was forced to introduce The Breeding of Dogs Act, which insists dogs are implanted with microchips and a supervisor regularly checks in to make sure no further mutations are made.

Just to be clear. All dogs come from wolves. The tiny Chihuahua Paris Hilton carries under her shoulder was the king of the forest a few thousand years ago. Why am I the only person disgusted by this? We all accept that Mengele was the personification of evil and the experiments he did are a dark time in the history of humanity. Christians are dubious of stem cell research because they see this kind of medicine as playing God so what about taking a lion out of the jungle and treating him like a bonsai tree until he can no longer reproduce? Do we refuse to recognize these horrors because they have such big eyes and they wag their tails when we walk in the room? No wonder people are unable to have a frank discussion about illegal aliens.

Some dog lovers agree with me and insist on getting mutts from the pound as a way to roll back the clock using hybrid vigor to bring back the wolf. This route is definitely LESS freaky but it’s too little too late and incidentally, if you keep him cooped up in an apartment all day or even delegate his exercise to a dog walker, that “too little” becomes even less.

Dog lovers are some of the most disturbing hypocrites around. How many times have you heard them put the lives of dogs ahead of their fellow man? “I wish they had to put Rush Limbaugh down instead of my Bella.” How many Sex and the City fans have funneled all their maternal instincts into their Chinese bulldog without even noticing their ovaries have expired? Dog lovers complain about salt on roads because it hurts Mr. McMuffin’s paws with no interest whatsoever in the human lives that salt saves. They curse establishments who refuse to jeopardize their license by allowing dogs in. They roll their eyes at parents who are uncomfortable with a dog roaming around them unleashed. They are thrilled with how loyal and enthusiastic their dogs are while quietly ignoring the part where we spent thousands of years making them that way. Then, they close the door on their genetic mutation and leave it in the apartment all day to try to figure out what the hell just happened. What a bunch of bitches.

So dog lovers, the next time you anthropomorphize your pet to the point of being offended when I refer to him as “a dog” instead of his given name, please take a step back and notice you turned a wolf into a circus freak and you”re raising him in an environment that is so unnatural it’s tantamount to living taxidermy.