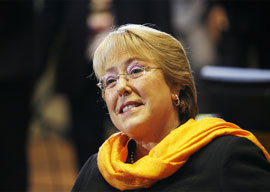 Chile is one of many faraway countries of which I know nothing, but I was intrigued to read in the French press of its recent presidential election. Socialist candidate Michelle Bachelet won by a large majority of the votes cast: 62.16% against 37.83% for her opponent. I presume that the remaining 0.01% were blank ballots, since there were no other candidates.

It is not humanly possible that the new president (actually president for a second time) should accept that the late General Pinochet had any beneficial effect on her country. Her father, an air force general, was murdered after the coup because he had remained loyal to President Allende, and she herself had been tortured before leaving Chile. Thereafter, according to the newspapers, she went as a refugee to Australia, after which she moved (also as a refugee) to East Germany.

It took a very special kind of person to exchange Australia for East Germany as a country of refuge; I leave it to the reader to decide what kind of person. Suffice it to say that I doubt that the East German authorities had many problems controlling the flow of refugees from Australia.

“The educated, or semi-educated, unemployed are the most dangerous class in the world.”

A little paragraph, printed almost as an aside, also attracted my attention:

In spite of the predicted fall in the price of copper “ the country’s principal resource “ in 2014, the Chilean economy is doing well, with a predicted growth rate of 4.9 per cent for the coming year, an inflation of 3.2 per cent, and a slight budgetary surplus.

As I sit here in a Parisian cafÃ© writing this, I could think of quite a few countries within less than a thousand miles that would like to have macroeconomic figures such as these.

The question rises irresistibly to my mind: If Allende had not been overthrown, if he had been allowed to follow socialist policies for three decades or so, would Chile’s economic situation now be so favorable, or would the country be creaking rather than flourishing?

The left-wing newspaper LibÃ©ration blamed the Chilean Christian Democrats (one of the parties in President Bachelet’s governing coalition) for the lack of social reform in Chile since the return to civilian rule:

Since the return of the civilians to power, the Christian Democrat Party, which had called for a coup d”Ã©tat against the socialist President Salvador Allende in 1973, has tried above all to preserve what it considers the “achievements” of the dictatorship, that is to say a flourishing economy, albeit one imposed by jackboot and at the cost of great social injustice.

Actually, Chile is one of the countries in the world that has most successfully reduced poverty in late decades”that is to say, poverty in the absolute and not the relative sense so beloved of those who find the meaning of their lives in social reform and who would much prefer equal penury (at least that of others) to unequal wealth.

The new president is determined to change things. “It is time,” she is reported as having said, “to change things fundamentally in our country.” For her, inequality in itself equals injustice, although no greater injustice than equality could well be imagined, for it would necessitate equal result for unequal conduct”in other words, everyone going to heaven however unrepentantly sinful.