Many Are Called, But Few Are Heroes 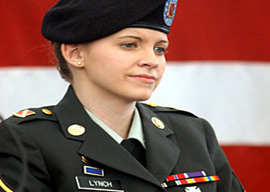 The word “hero” should not apply to every man and woman serving in the military. To blindly term everyone a hero takes away from those who do something extraordinary. It’s like saying “our boys”; it takes away from “our girls.” Don”t they all do an extraordinary job? No, they don”t. Going to war is not extraordinary for a soldier; it’s the whole point of being one. Doing something extraordinarily courageous in that situation would be heroic, but getting on the plane? That’s like getting on the Tube or the subway to work. It’s not heroic. It’s part of the job.

The military isn”t only a bunch of GIs lying on a ledge shooting into the distance. It’s administration staff, police, chefs, storekeepers, postmen and women, mechanics, musicians, chaplains, medics, blanket stackers, dog handlers”all of these and more. All are essential in helping pump blood around the machine to make it work.

To your average soldier, the postal staff seems heroic. They bring envelopes and packages which mean the world to a soldier at war: a drawing from your kid, a naughty picture from your other half, or sweets you can”t get over there. Bags of morale. All soldiers are brave. It takes courage to kiss your family goodbye and not know if you”re coming back. But it’s those who do something extraordinary that are the heroes.

“To blindly term everyone a hero takes away from those who do something extraordinary.”

Jessica Lynch comes to mind. She was an American soldier that Iraqis kidnapped in 2003. I was seconded to the United States Marine Corps at the time but nowhere near her. Here’s how we actually got news: Something would happen”for example, the Lynch kidnapping. The troops around the incident would only pass on bits of information or, for security reasons, none at all. We would find out what happened, or so we thought, from newspapers our friends and families sent from back home. So for something happening in the same country only a few miles away we would have to wait for a week or so until the post arrived from thousands of miles away. We all read how Jessica had been shooting at the kidnappers as they dragged her away. There were more than a few angry voices in the chow hall that night as Marines promised to put things right. Then the real story came out and Jessica told how she had never fired her weapon. In her own words, “That wasn’t me. I’m not about to take credit for something I didn’t do….I’m [only] a survivor.” She could have gone along with the story the Pentagon was pushing out, but she didn’t. She told the hard truth. To me she’s a hero.

My own service in Iraq was hugely different. People shot at us, but the Marines would respond with shock and awe, which kept the shooters at a distance. Then the Iraqi Army surrendered and the insurgency started. These people would mortar us constantly. The ground would shake and people would die. This was the job. This was soldiering. In the midst of all the shaking and dying, some people did a little bit more than others. They were the heroes. I know a man who froze under mortar fire. He then got up despite his absolute fear and carried on; to me he was a hero that day.