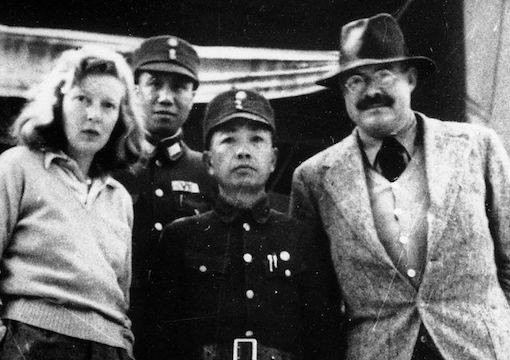 GSTAAD—Martha Gellhorn was a long-legged blond American writer and journalist who became Papa Hemingway’s third and penultimate wife. She got her start when H.G. Wells, then 70 years old, fell for her rather badly, advised her on her writing, and paid her a small retainer to keep him up to date on American trends. She was 27 at the time. Wells had met Martha at the White House during the Franklin Roosevelt years before the war, Eleanor having been friends with Martha’s mother, who was known around St. Louis for having a mad crush on the First Lady.

Yes, dear readers, sex existed even back then, but people didn’t tweet each other about it, they just did it. I never met Martha Gellhorn, although she lived a few doors down from me in Cadogan Square, and the times I spotted her—a very old lady carrying some plastic bags—I was not about to interrupt her routine with questions about my hero Papa, and why she disliked him so. Back in her youth Martha was staying in Wells’ beautiful house in Regent’s Park and the great man, potbellied, red-faced, and short, had amorous fantasies about her, but luck was on her side. Wells had Moura Budberg, Maxim Gorky’s ex-mistress, as “la régulière,” so H.G.’s amorous wishes remained just that.

“Left-wing journalists are infamous for their lies, and Martha was no exception.”

Guess what happened next? The old lecher ordered Martha to be more disciplined—up early for breakfast, regular hours behind the typewriter—drills most youths regard as useless. The old boy insisted, so in order to get back at him the young woman went into the garden and banged away on her machine for a while, and before lunch she had produced what Wells thought a masterpiece. Her London agent sold it right away—to The Spectator, where else, but here comes the bad news. The masterpiece was called “Justice at Night,” and it was an account of a lynching of a 17-year-old black sharecropper in Mississippi, near the Louisiana border.

Martha and a French man-friend were witnesses to the horror. She used a neutral voice and kept her emotions out of the piece, thus doubling the abomination as far as the reader was concerned. The Speccie paid fifty dollars for the article, fifty prewar dollars, which might give ideas to the young whippersnappers contributing today to the best and oldest magazine in the world. I say furrgettaboutit. Martha wrote how the victim “made a terrible sound, like a dog whimpering…” and described the terrible smell of kerosene the poor youngster was doused in. The Spectator piece had everyone who counts up in arms. Reader’s Digest bought the rights and many magazines reprinted the piece. Martha Gellhorn was famous overnight. She was blond, tall, and smart, had great legs, was a friend to great men and presidents, and could write better than most men. There was only one problem: Martha Gellhorn had driven through the South once on her way to California, but had never been to Mississippi, had never witnessed a lynching, and had never heard a victim making terrible sounds like a whimpering dog. The closest she’d ever got to the horror she had artfully described was when she got a lift from a truck driver who bragged about having been to a “necktie” party a few years before.

I read somewhere that Martha did not return The Spectator’s check, in fact used it to travel to Paris in order to research a novel. So what else is new? Left-wing journalists are infamous for their lies, and Martha was no exception. What’s one made-up lynching when Walter Duranty of The New York Times lied about 5 million Ukrainian deaths through starvation ordered by Stalin? As Lionel Shriver wrote a couple of weeks ago, The New York Times is not to be trusted. I say it’s far worse than that; the paper has replaced Pravda in manufactured news, as in the 1619 Project, which even Baron Munchausen would have not dared invent.

Martha’s problems with Papa Hemingway were, I think, that she was jealous of his talent, whereas her gift for fiction was limited to the Mississippi lynching and the Czech novel A Stricken Field. She constantly put him down when the great man would brag or bully people, which was a good thing, but she did it for revenge, not because it was the wrong thing for Papa to do. Mind you, she was physically very brave, was active until the end, and covered wars with the best of them, including Robert Capa, who took the greatest combat picture ever, of a Spanish volunteer at the precise moment he’s hit by a fascist bullet; for that also turned out to be a lie, as the picture was posed by the charming lefty Capa and his buddies.

Although Martha’s name became a byword for courage on the battlefield—something that must have rubbed Papa the very wrong way—like many women on the left she was drawn to strong and very rich men, General James Gavin and Laurance Rockefeller, among many others. She committed suicide in 1998 because of failing health, a brave thing to do. Although this is pure supposition, were she alive today she’d be pro-E.U., the profoundly antidemocratic institution that has mismanaged everything except the salaries of the elites it employs; she would be anti-Brexit and anti-Boris, although she would have tried to seduce him when he was mayor. She would have championed BLM and Biden, and written Der Stürmer-like editorials against Trump.