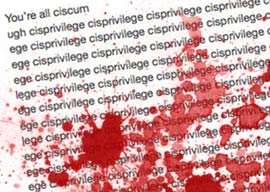 TRIGGER WARNING: This article contains bushels and bales of foul language. It also quotes passages that are so hate-filled, they make Adolf Hitler look like Doris Day. As a result, many readers may find this material problematic. Enter with caution, and DO NOT touch the museum exhibits.

As a cisgender male, I feel it incumbent upon me to inform select members of this audience”basically, all of you”that you, too, are cisgender and certain people may therefore wish you grave harm because of it.

The neologism “cisgender””and it’s a soft “c,” as in “celebrate” and “cemetery””heat-welds the Latin preposition cis (“on this side of”) to the word “gender.” The prefix “cis-” is the polar opposite of “trans-,” which means “across” or “beyond.” By definition, cisgender persons stand in binary opposition to transgender persons, who are pretty much the only ones who ever toss around the word “cisgender,” anyway.

“Like so many in the topsy-turvy social-justice demimonde, they insist that you accept them while they reject everything you represent.”

According to the trannies, “cisgender” persons have somehow convinced themselves that their “gender identity” correlates with the gender they were assigned at birth. Mind you, those who may assign you the “cisgender” tag long after you were born don’t seem to realize that it may have been Mother Nature who assigned you this gender in utero as a result of giving you either a plug or a socket below your waistline. No, they insist that gender is a social construct, and as such, it must be deconstructed and perhaps even surgically reconstructed.

Are you with me? Me, neither. If it all sounds very divisive, that may be precisely the point.

It is on Tumblr“that infantile nexus of millennial social-justice insanity”that transsexual rage finds a safe, welcoming space in which to blossom:

That is when I instantly screamed at them to shut up because as someone who is not trans* they will never understand what being transgender is about and that they should choke on a bucket of glass for even suggesting that they could have any idea what I and others like me go through every day.

I hiss at and/or eat cis scum…

I don’t know what’s worse, her misgendering me or her assumption that because I was born a boy, I must want to wear man’s underwear! It literally tears me apart when she says that. I just want to throw the boxers in her face and scream, “HOW CAN YOU NOT KNOW I’M A GIRL, YOU FUCKING ASSHOLE???