Mau-Mauing at ‘The New York Times’ 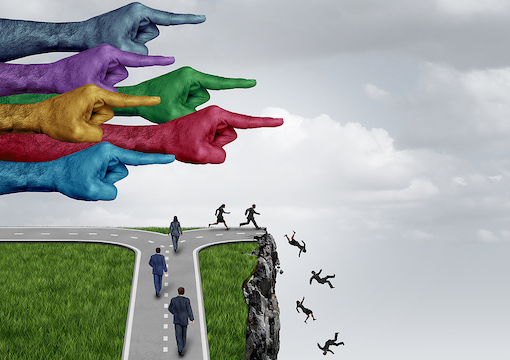 Donald McNeil worked at The New York Times for 45 years. He was recently nominated for the Pulitzer Prize for his articles on the pandemic. In a discussion several years ago with a teenager about one of her classmates, McNeill asked if the classmate had called someone else the N-word or whether she had been rapping or only quoting a book title. It was as if he had said: “We should all be very careful never to call anyone a ‘nigger.’”

He was investigated, of course! And acquitted. But that was then—before the healing spirit of Joe Biden covered the land.

It’s tempting to say to McNeil, “Serves you right for working at The New York Times.” And maybe it does.

But maybe he worked there to feed his wife and children (do New York Times employees have children?) or his aging parents. We should examine the issue, regardless of how woke McNeil may be, because his fate may tell us something about us.

McNeil is the victim of cultural terrorism, and if “the community” (even if it isn’t his community) doesn’t object to his treatment, the community’s members will become victims too. It’s time the non-woke community said, “Enough!”

Parenthetically, isn’t it also time to see if Joseph Pulitzer’s papers ever used the word “nigger”—and if they did, to rename the prize?

Why, one should ask, is saying or writing “nigger” so bad? Please don’t say it shocks people. In modern discourse, print, and screen, the f-word and the s-word (and a lot of words just like them) are used as commonly as “and” and “but” and “the” without any delisting by the guardians of our culture.

Here’s a line from the movie The Way of the Gun, described as “an American neo-Western action thriller: “Shut that cunt’s mouth or I’ll come over there and fuckstart her head.”

Have you ever listened to gangsta rap music? Don’t. It’s a persuasive argument for mandatory induced aphasia. It’s mostly, or entirely, a product of black culture (though that libels the word “culture”). And it is hugely offensive to anyone who remains capable of being offended.

“McNeil is the victim of cultural terrorism, and if ‘the community’ doesn’t object to his treatment, the community’s members will become victims too.”

Where is the socially redeeming value in “X-Is Coming” by DMX?

Man, if we was up north, niggas would have been fucked you
But then we in the streets, niggas should haven been stuck you
Plucked you like a chicken wit’ your head cut off
They’ll find you wit’ your back open and your legs cut off
And as for your man, don’t you ever in your mothafuckin’ life
Know when I gotta gun come at me wit’ a knife, a’ight?
And forgetting you ever saw me is the best thing to do
Don’t give a fuck about your family, they’ll be resting with you

Why do they tell us that it’s okay for blacks to use the word “nigger,” or “nigga,” as commonly as other people say “good morning,” but not whites? What’s going on here?

One of two things. Either the wokies are treating blacks as inferiors, too stupid and coarse to stop scratching in public and using “nigger” when they talk among themselves. Or they are pandering to blacks as they all, blacks and white wokies alike, mau-mau the white man. Which is worse? Use only one and a half blue books.

If it’s okay for blacks to say “nigger” but a firing offense for whites, what white parents will want their children going to school or playing with black children and picking up language that will get them expelled from school or their parents canned from their jobs?

For the record (pay attention): One should not call anyone a “nigger.” Period.

But neither, for the record, should anyone call someone a “fucking cunt.” Period.

Would you lose your job at The New York Times if you had asked a student if her classmate had actually called someone else a “fucking cunt” or whether she had been only rapping or quoting a book title? Please. We’re trying to have a serious discussion.

“Canuck” was once a vaguely insulting term for Canadians, not nearly as potent as “nigger,” but still insulting.

Today, if you’re a young lad and you like to play hockey, you’d give your eye teeth (and you may literally have already given your eye teeth) to play on the Vancouver hockey team: The Canucks.

Every basketball-playing kid in the country would have dreamed about joining the Harlem Niggers.

For those of you who don’t follow basketball, it didn’t happen.

And it won’t happen because blacks, at least the noisy, rabble-rousing blacks like “The Reverend” Al Sharpton, like the word “nigger,” but they like it as a proprietary tool with which to beat up whites.

And the wokies like it for the same reason. You can easily imagine, oh, 150 New York Times writers sitting around having drinks after a hard day’s work at the office writing copy about how Joe Biden is bringing us all together, saying, “Hey, let’s do something to get that Catholic schmuck at desk 45 to use the word ‘nigger’ so we can get him canned.”

Of course, “schmuck” is a Jewish word, but they wouldn’t mind using it as long as they thought other people wouldn’t think they were pro-Israel.

These people are cultural mau-maus, and “nigger” is one of their machetes.

A newspaper column is about 800 words. Fifty columnists should send in their column (on Feb. 28, the last day of “Black History Month”) containing just one word, “nigger,” 800 times. O offensive word, where would thy sting be then? Of course, the wokies wouldn’t approve; they like the word “nigger”: It’s one of their favorite tools.

You may not know Donald McNeil. You may think New York Times writers are all scum. And you may be right.

But if you don’t speak out for McNeil, who’ll speak out on your behalf when they come for you?