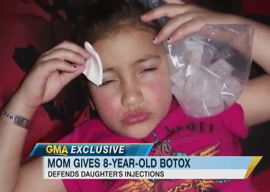 As May draws to a close, we’d like to set a good example by making public examples of parents who’ve made bad examples of themselves this past month.

All right, let’s clarify that and say they allegedly made bad examples of themselves this past month. Many of these cases have yet to be settled in court, so we’ll toss in a “reportedly” or an “according to” as required by law. That (reputedly) allows us some leeway to (purportedly) ridicule everyone.

Amid a month where millions of parents undoubtedly did billions of bad things and made trillions of bad decisions, we’ve chosen ten prime examples of far-from-exemplary behavior. Many cases didn’t make the final cut because they were either too grisly or too typical. The main criterion for selecting our ten “winners” was novelty rather than brutality. We consider these the ten most interesting cases of bad parenting in May 2011.

Counting down from 10 to 1, with #1 being the most “interesting” merely because it’s so fascinatingly annoying:

10. MOM AND DAUGHTER ACCUSED OF CANCER SCAM
In small-town South Carolina, a mannish woman named Angela Chapman and her 15-year-old daughter have been charged with bilking local citizens’ generosity by soliciting donations for the daughter’s cancer, chemo, and radiation treatments although the girl was perfectly healthy—at least physically. Mom and daughter allegedly drove 1,200 miles roundtrip so the girl could pose for pictures wearing pajamas in front of St. Jude’s Children Hospital in Memphis as if she’d been a patient there. They raised an estimated $1,200 in contributions before being nabbed.

9. “BOTOX MOM” CONFESSES TO HOAX
California mother Sheena Upton gained international press coverage and made appearances on Inside Edition and Good Morning America by claiming her name was Kerry Campbell and that she’d given Botox treatments to her eight-year-old daughter Britney. She went so far as to inject a needle in Britney’s face while a reporter for British tabloid The Sun watched. This led to international scorn and revulsion, which only intensified after Upton revealed she’d made up the entire story for cash and was only using her daughter as a theatrical prop in an elaborate media prank.

“We’d like to set a good example by making public examples of parents who’ve made bad examples of themselves this past month.”

8. CENSUS STATS REVEAL INDIA’S FEMALE INFANTICIDE EPIDEMIC
India’s recently released 2011 census data shows only 914 girls under age six for every 1,000 boys. In the rural district of Morena, the figure dipped to only 825 girls per 1,000 boys. Due to cultural traditions that deem sons more valuable than daughters, many parents opt for illegal abortions after finding out their fetus is female. Countless baby girls are also systematically starved and neglected, often to death. “Women cry when they have girls,” observed a female nurse. “Everyone wants a boy,” said a woman described as “unhappy” because her daughter-in-law has borne six daughters and no sons.

7. MOTHER ALLEGEDLY USES SON TO HELP BREAK INTO EX-BOYFRIEND’S HOUSE
Dayanne Costa, 22, of Newport, RI, was arrested for breaking and entering into her ex-boyfriend’s house in the early morning hours of May 25th. She had reportedly hoisted her tiny son into the house through a front window and told him to open the front door for her. An honorable mention goes to a West Virginia couple arrested for reportedly leaving their three children at home while they attempted breaking into a car.