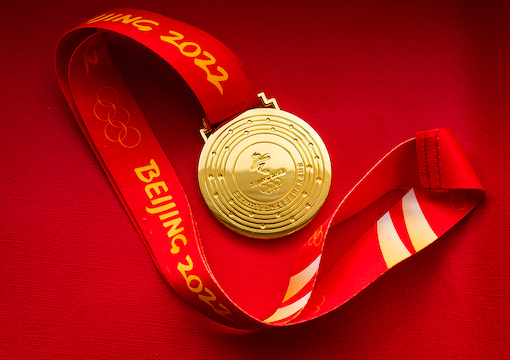 GSTAAD—Okay, sports fans, have you been enjoying the concentration-camp Olympics? I’m sure the Uighurs in the Chinese gulag are riveted, especially watching the downhill, the trouble being most of the one million Muslim prisoners have been issued Equatorial Guinea-made TV sets, apparatuses that only film crocodiles swallowing humans.

Joe Biden, in the meantime, has steered clear of the Games and has sent a message via pigeon to the Chinese: “You’re way out of line as far as Hong Kong is concerned, and unless you sign the Schleswig-Holstein agreement do not expect any Americans to attend the premiere of Madame Butterfly.” Good for you, Joe, you’ve finally woken up to the yellow menace, as some of us old-timers used to say back in the ’50s. Except now they also have cars instead of rickshaws, and atomic bombs that go boom in the night. Biden also threatened to send in the 7th fleet if China attacked Taipan, triggering Taipan Lord Kadoorie in Hong Kong to demand an explanation.

That China operates outside the bounds where human rights are concerned is undeniable. In D.C. Chinese-bashing is suddenly in season; view the latest bulletins emerging from the White House. Biden warned the Chinese against avarice, pride, and overeating, but also signaled to “Emperor Hirohito not to interfere with the Olympics in Manchuria.” This has impressed the Bagel Times editorial board, which described Biden’s message as “robust, full of sudden insights, and profound.” Coupled with Kamala’s caution to Chiang Kai-shek, which the paper described as a “fearless and distinctive voice.”

“Was it proper to send an overweight rapper to comfort underweight, sick females?”

My old editor and friend Boris Johnson may also have stayed away from the Olympics but has sent nonstop encouragement to the GB team, promising not only prosecco and a garden party upon their return, but also dirty pictures of Petronella Wyatt, his old squeeze, taken before he became prime minister. (For the male Olympians, that is, unless some of the females also request a peek.) Boris, however, has been strangely quiet about the disappearance of Peng Shuai, the tennis ace who once upon a time played mixed doubles with him and raised the wrath of his present wife. Or maybe it was a previous one, this writer is old and has lost count. The president of the IOC, the IOC being the World Health Organization of Sport, and a Chinese government subordinate, Thomas Bach, had previously called Peng and the latter said she was fine, had forgiven Boris, and was training for Wimbledon 2020 next year. Peng plans to enter the doubles with Fan Bingbing, the actress who got into trouble some years ago with a high-ranking Chinese official. Fan Bingbing will play the left court as her one-handed backhand return is known as the best in China. The Peng-Bingbing team is as good a bet to win as the Kyrgios-Kokkinakis Greek team that has just won the Australian men’s doubles and has had their image sculpted in marble up at the Acropolis already.

The IOC is following in the footsteps of corporations, financiers, and sports leagues that do brisk business with China and end up complicit in the regime’s crimes by remaining silent while raking it in. The high ideals the Olympics are supposed to represent have been compared to Biden’s mangling of the English language, although many activists on the left believe otherwise. When I spoke to the White House, a sweet female assistant put me through to the president himself. Hardly believing my luck, I politely asked Biden what he thought of the concentration-camp Games: “A pestiferous pustule poisoning is what white privilege is,” he answered, and then, talking to his wife while I was still on the line, he added, “Alimentation will do the trick every time.” He then hung up.

Athletes and teams in the Olympics receive crucial funding from corporations, hence when I contacted Coca-Cola headquarters about the Chinese concentration camps, a spokesman burped rather loudly, then burped again and again and then hung up. But to be fair, at least Biden did not attend the Games in Chongli, 120 miles north of Beijing, and world headquarters of man-made snow, unlike George W. Bush, the war hero who went to Beijing in 2008 and gave legitimacy to the brutal crackdown in Tibet. Back then I had challenged George W. about Tibet, but all he said was that Tibet was the birthplace of Saddam Hussein, hence a legitimate target. He then called me an asshole.

Such are the joys of challenging the high and the mighty. My luck with the White House aide did not last. She sounded very pretty and demure when she first put me through, but after my second call she was more Kamala Harris than Melanie in Gone With the Wind. The reason for my second call was Lizzo, the black American female rapper who weighs close to two tons and was recently sent to Africa by the Biden administration to entertain and give comfort to women suffering from pellagra, a disease of hunger. Was it proper to send an overweight rapper to comfort underweight, sick females? The Kamala Harris version called me an asshole before hanging up.

Never mind, I can take it. And things are looking up. Chiang Kai-shek has been put on notice, as has Emperor Hirohito, and the commies in Beijing are seriously worried that Americans won’t attend Madame Butterfly, Chopin’s latest opera that exposes Poland’s crimes against the Soviets and Nazi Germany. Time marches on.