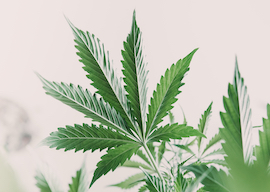 I think I’ll direct a series of low-budget movies with names like “Tobacco Madness,” “Gun Madness” and “White Male Madness.” The plots will be exactly the same with, alternately, cigarettes, guns or whiteness causing high school students to go insane, causing mayhem and murder.

In addition to launching my campaign for the Democratic presidential nomination, my films will be so silly that, in the future, they will anathematize any untoward remarks about smokers, gun-owners or white men. (Making certain arguments entirely off-limits is terrific for generating fact-based solutions!)

A “No Smoking” sign in a hospital room? What is this? “Tobacco Madness”?

That’s what the 1930s propaganda film “Reefer Madness” has done to the discussion of marijuana in the United States, as is evident from the eye-opening new book, “Tell Your Children: The Truth About Marijuana, Mental Illness, and Violence,” by longtime New York Times reporter Alex Berenson. (Don’t worry — he covered the pharmaceutical industry, not politics.)

The evidence that pot, and pot alone, triples your chances of developing a psychosis is overwhelming. Berenson cites hundreds of studies showing a direct link between cannabis use and psychoses like schizophrenia.

For every objection, he’s got another batch of studies, including his own groundbreaking research.

Aren’t these just schizophrenics-in-waiting who were self-medicating with pot? No, people with zero personal or family history of any type of mental illness show a statistically significant increase in psychosis diagnoses after using cannabis.

Isn’t this because most pot-smokers are young men in their late teens to late 20s — the danger zone for schizophrenia? To the contrary, Berenson shows that new psychosis diagnoses among adults in marijuana-friendly states like Colorado have shot up right along with pot legalization. One Dutch study of 4,000 previously healthy adults found that marijuana use nearly tripled the risk of developing psychotic symptoms within three years.

If any other substance tripled the odds of losing your mind, I think the public would know about it. But in America, reporters — even scientists — are more worried about sounding cool. What? Do you believe in “Reefer Madness”?

“With the surge in cannabis consumption has come a surge in overdose deaths and psychosis.”

There’s also the problem that the Worst Generation smoked a lot of pot when they were idealistically rioting on college campuses in the 1970s and consider it harmless. It didn’t hurt them, did it?

But, as Berenson says, the difference in the pot being consumed today and that smoked by earlier generations is the equivalent of comparing a martini to “near beer.” In the 1970s, most pot contained less than 2 percent THC -– the chemical that gets you high. “Today’s users wouldn’t even recognize that drug as marijuana,” says Berenson. The legal pot sold today is usually at least 25 percent THC. Cannabis “wax” and “shatter” can be almost pure THC.

The United Kingdom’s scientific community has been screaming from the rooftops about the link between cannabis and psychosis for decades. As a consequence, marijuana use and support for legalization have collapsed. From the early 2000s to today, cannabis use in the U.K. has been cut by a third.

In that same time period, marijuana consumption in the U.S. and Canada skyrocketed. By now, American adults use cannabis in a month at a rate higher than British adults do in a year.

With the surge in cannabis consumption has come a surge in overdose deaths and psychosis.

In 2006 America — just as the latest rise in pot consumption began — there were about 30,000 emergency room diagnoses of psychosis with marijuana use disorder alone. By 2014, that number had tripled, with almost 90,000 emergency room visits for cannabis-induced psychosis.

Only a few of the emergency room patients with marijuana dependence showed any other drug in their systems. And the cannabis-related psychoses were more severe than the others, resulting in hospitalization twice as often as psychosis alone.

Here’s my trailblazing study explaining the wide gulf in marijuana use in this country compared to the U.K.: British scientists and journalists weren’t embarrassed by the hyperbolic nonsense of “Reefer Madness,” so they could tell the truth.

While in Britain scads of scientific studies are published with titles like “What Is the Mechanism Whereby Cannabis Use Increases Risk of Psychosis?” and “The Acute Effects of Synthetic Intravenous Delta 9-Tetrahydrocannabinol on Psychosis, Mood, and Cognitive Functioning,” the American media produces only happy talk about pot. You don’t want to sound uncool, do you?

Recently, this tabloid-bait study appeared all over — in Cosmo, Women’s Wear Daily and other important scientific journals: “Marijuana really DOES give women better orgasms.”

On closer examination, the alleged “study” consists exclusively of the self-reports of potheads. Yes, cannabis-consuming patients at a single OB/GYN clinic were asked if they had better orgasms after smoking pot. In a shock for the ages, the pothead patients said, Yes, better!

A more accurate title for the so-called “study” would be: POTHEADS LIKE POT!

I thought the American media’s universal, exhaustive, flood-the-zone lying about immigration could never be matched for any other subject. Read Alex Berenson’s “Tell Your Children,” and you’ll see how wrong I was — and you are, too.