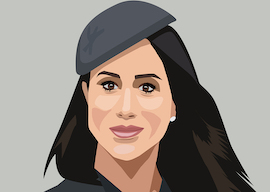 Meghan Markle is doing such a good job at destroying the monarchy, she could be a foreign agent.

The idea seems far-fetched, that the CIA would train a B-list Hollywood actress and use her as a honey trap to infiltrate the British royal family where she would wreak havoc and bring about demands for the abolition of the aristocracy.

But how else can one explain the Duchess of Sussex’s boorish behavior?

Beautiful women have been used as spies since the days of Catherine de Medici and Mata Hari.

Rupert Murdoch is convinced that his second wife, Wendi Deng, was an agent for the Chinese government. That would explain her affair with former British prime minister Tony Blair that blew up the marriage.

Who could forget her incriminating note? “Oh, shit, oh, shit,” it read, “Whatever why I’m so so missing Tony. Because he is so so charming and his clothes are so good. He has such good body and he has really really good legs Butt … And he is slim tall and good skin. Pierce blue eyes which I love.”

“She was pretty and sexy, the kind of young woman I’d want to pick up at the Regency bar and spend a dirty weekend with in Montauk.”

I was thrilled when Prince Harry started seeing Markle. How wonderful that instead of a blue-blood English virgin, like his sainted mother, Diana, Harry had fallen for a biracial divorcée, a commoner semi-famous for starring on Suits, a cable-TV show about lawyers.

She was pretty and sexy, the kind of young woman I’d want to pick up at the Regency bar and spend a dirty weekend with in Montauk.

I could forgive her for her parents. One can’t pick one’s parents. Her father, Thomas Markle, who had raised her after her parents’ divorce, was barred from the royal wedding after monetizing his new fame and selling ill-advised interviews.

She dumped her friends. Ask Piers Morgan. She even dumped her dog. We loved Meghan anyway.

But the honeymoon was brief because she just isn’t very good at her new job. She’s no Grace Kelly.

There has been tremendous turnover among the staff assigned to her by Buckingham Palace, because she is difficult, demanding, and dismissive.

She caused a rift between Harry and his older brother, William, with her scene-stealing, high-handed ways. Will’s wife, Kate, can’t stand her either.

Markle spent her entire pregnancy cradling and clutching her bulging abdomen—even before it was bulging—as if her womb would fall off and hit the floor without her support.

“Vanity, pure vanity,” one wise mother told me. “She wants to make sure that everyone who looks at those photos in years to come knows she was pregnant, and not just fat.”

Markle—like everyone else in Hollywood—supported Hillary Clinton in 2016, and said she would stay in Canada, where Suits was filmed, if the “divisive” and “misogynistic” Trump won.

So, it was no surprise she boycotted his three-day state visit, ostensibly because she was busy taking care of baby Archie.

When Trump was told of her comments and that he wouldn’t be seeing her, he said, “I didn’t know she was nasty.”

To make sure her snub was clearly seen as a snub, Markle came out in public for the Trooping of the Colour right after the Trumps left London. And she screwed up.

Markle kept turning away from the crowd, and the cameras, to speak to Harry, who harshly told her: “Turn around.”

Despite the popularity of the Windsors—the reverence for Diana is almost a religious cult—there is a die-hard contingent of Labour Party lefties who want to see the monarchy abolished, along with the House of Lords and every last vestige of the aristocracy.

On this side of the pond, there is no doubt that Bernie Sanders and Rep. Alexandra Ocasio-Cortez would agree.

Sadly, there are fellow travelers in America’s intelligence agencies, like the ones who used the Steele Dossier to try to bring down Trump, who would prefer a royalty-free socialist government in Britain.

That is why Markle can get away with snubbing Trump while she is working with the deep state. Trump probably hasn’t even been informed that she is a CIA asset.

Hopefully, just as Murdoch learned the truth about Wendi Deng, Harry will find out about Meghan Markle, and the monarchy can be saved. The future King William V depends on it.