Men of Bad Will 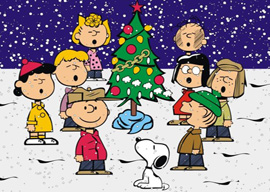 NEW YORK—“Men of good will” is an expression you don’t hear much anymore. It’s used mostly by the courts, especially when the topic is contract law, because when two guys sign an agreement, they’re expected to be frank and open about their intentions.

But during the Christmas season, “good will” gets trotted out in many forms, most famously in the Linus speech in the 1965 animated classic A Charlie Brown Christmas.

For those of you who haven’t re-watched it lately, the speech is motivated by the complete humiliation of Charlie Brown as he tries to put on a Christmas pageant (symbolized by the most pathetic Christmas tree ever harvested or displayed).

Defeated by the project, Charlie Brown says, “Isn’t there anyone who knows what Christmas is all about?”

Linus van Pelt—the most insecure child in the neighborhood, and the only one who doesn’t laugh at Charlie Brown for his failure—replies, “Sure, Charlie Brown, I can tell you what Christmas is all about.”

He then walks to the center of the stage and says, “Lights, please?”

And does a verbatim recitation of Luke 2:8–11 in the King James version:

And there were in the same country shepherds, abiding in the field, keeping watch over their flock by night. And, lo, the angel of the Lord came upon them, and the glory of the Lord shone round about them. And they were sore afraid. And the angel said unto them, “Fear not!”

On the words “Fear not,” Linus drops his security blanket—obviously the moment when he loses all fear—and then, as though transformed into a prophet, completes the passage.

“For, behold, I bring you tidings of great joy, which shall be to all people. For unto you is born this day in the city of David a savior, which is Christ, the Lord. And this shall be a sign unto you: You shall find the babe wrapped in swaddling clothes, lying in a manger.” And suddenly, there was with the angel a multitude of the Heavenly Host praising God, and saying, “Glory to God in the highest, and on Earth peace, and good will toward men.”

Linus then picks up the security blanket and walks back over to Charlie Brown.

“You have to go back to times of major wars to find so many who have divided the nation, or the world, into Us and Them.”

“That’s what Christmas is all about, Charlie Brown.”

The Catholics consider this scene a heresy.

Granted, the Catholics consider many things heresies, but this particular one is caused by a centuries-long dispute about a single letter in the text. Angels singing about God’s good will toward all men is, they say, a misreading of the last line. It should read instead, “Glory to God in the highest, and on Earth peace and good will to those He favors.”

Indicating that God is offering his peace message only to those who are deserving of it.

Leave it to the Catholics to throw cold water on Linus.

Of course, we Scots-Irish Protestants much prefer the Linus/King James version, if only because it’s more ecumenical and would presumably include an invitation to Jews, Muslims, Buddhists, Hindus, and atheists along with those Christians who have fallen away from the faith. Protestants are all about invitations to join in. The birth of Jesus is, according to Linus, a cosmic event that has no denomination.

I have to admit, grudgingly, that the Catholics have history on their side. The phrase that translates into “good will toward men” in the original Greek is anthropois eudokia, but in the five oldest manuscripts of the book of Luke, eudokia does not appear. The second word is spelled eudokias, and that “s” changes the meaning entirely. The first time the “s” was dropped was around 170 AD in one of those “harmonies” attempting to combine all four Gospels into one book, and the author of that book, called the Diatessaron, was a guy named Tatian who was not considered very reliable, so he may have simply omitted the “s” by mistake. At any rate, the meaning “men in whom God is well pleased” became “all men,” and then it became even more confusing over the succeeding centuries when we started to attach “good will” (eudokia) to the characters of those who are considered benevolent, kindly, peaceful…godly. We changed something God was offering to man into something men could offer to one another.

Perhaps the most famous use of the phrase came in 1956, in a speech by Martin Luther King Jr.—a Protestant preacher named after the original Protestant—about the Supreme Court’s ruling in Brown v. Board of Education.

“To all men of good will,” said King, “this decision came as a joyous daybreak to end the long night of human captivity.”

But, of course, by limiting the shared joy to “men of good will,” King implied there were men of bad will, men who would not respect Brown v. Board of Education, many of them Christian, many of whom thought the promised land was segregated.

And now the men of bad will have returned. We have just finished a year of second agendas, vengeance-seeking, shouting, accusing, careless harm of others, and returning evil for good. The public arena has been full of lying and vindictive rulemaking. Elected officials and spiritual leaders alike have sought the letter of the law so they could avoid its spirit. You have to go back to times of major wars to find so many who have divided the nation, or the world, into Us and Them.

My recommendation for this sorry state of affairs: Let’s look again at the second chapter of Luke and try to figure out how to access that good will—assuming Luke was not proffering fake news.

The reason I frame it that way is because Luke was the closest thing to a journalist we have among the New Testament writers. He made it clear that his Gospel was based on “a careful investigation.” He was a physician who never met Jesus, but was an assistant to Paul and obviously had the sort of detailed mind that would seek out every fact and try to set it down as accurately as possible. As a result, the Gospel of Luke and his second work, called the Acts of the Apostles, are full of historical and political context that you find nowhere else. Anyone who has ever dipped into the murky world of New Testament exegesis knows that all the documents are messy, incomplete, and full of long silences, but the fact that they’ve held up over the centuries is in large part thanks to Luke, who anchored many of the narratives against secular events:

And it came to pass in those days, that there went out a decree from Caesar Augustus, that all the world should be taxed. (And this taxing was first made when Cyrenius was governor of Syria.) And all went to be taxed, every one into his own city. And Joseph also went up from Galilee, out of the city of Nazareth, into Judaea, unto the city of David, which is called Bethlehem; (because he was of the house and lineage of David:) To be taxed with Mary his espoused wife, being great with child. And so it was, that, while they were there, the days were accomplished that she should be delivered. And she brought forth her firstborn son, and wrapped him in swaddling clothes, and laid him in a manger; because there was no room for them in the inn.