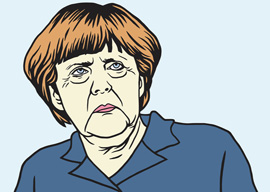 Angela Merkel has been Chancellor of Germany for twelve years. Of all the leading politicians in Europe, only Vladimir Putin has been in power longer. The next German federal election is on Sept. 24. If she wins that and completes her next term, she will have ruled as long as Helmut Kohl, and longer than Konrad Adenauer. Merkel is now campaigning with this slogan: You Know Me.

What do we and the German people really know about Angela Merkel? Her visions, agenda, and background? It is not easy to grasp. Do we really know?

Two recent books try to give a clearer picture of the person now called “The World’s Most Powerful Woman”: Merkel’s Maske by Hinrich Rohbohm and Merkel—Eine Kritische Bilanz (A Critical Analysis). The latter is a collection of 22 articles by German intellectuals. They paint a picture different from the one served up by the German mainstream media. Rohbohm’s tome goes through the information about Merkel’s time in the former German Democratic Republic (GDR), which she reported on to various journalists and biographers over the years. Of some twenty books about Angela Merkel, the author of this article has read thirteen of them.

Her father, Horst Kasner, was a young, left-wing Lutheran priest living in Hamburg, West Germany, in 1954. A few months after his daughter Angela was born, the family moved to Templin, north of Berlin, in the former GDR. This was perhaps not the most obvious choice of settlement for a young West German priest, less than a year after the brutal Soviet military crackdown on the revolt against the GDR regime in Berlin on July 17, 1953. Normally people fled in the other direction if they could. Hundreds of thousands left the GDR in 1954.

Soon Mr. Kasner became known as “The Red Pastor.” In the early 1960s he became leader of a priest seminar; its mission was to train a new generation of socialist church leaders. In the GDR, the Lutheran church was dominant. Mr. Kasner worked closely with the ruling party, the Socialist Unity Party, to build the new socialist church, Kirche im Sozialismus (the Church in Socialism), completely separated from the church in West Germany. Unlike many of the children of priests who were often denied access to higher education, Kasner’s daughter Angela was given the opportunity to study physics at Leipzig University, and later at the GDR’s foremost scientific institution, the Academy of Science in Berlin.

Angela had a traditional party career, starting with membership of the Thälmann Pioneers (motto: Be ready), followed in 1969 by the Freie Deutsche Jugend (FDJ), the communist youth organization. No doubt Angela was gifted, diligent, and smart. She was the best in school. She won the Russian Olympiade national award in the Russian language in 1970 at the age of 16. It gave her the opportunity to travel to Moscow on the Zug Der Freundschaft (the Train for Friendship). Her excellent knowledge of Russian opened many doors.

“What do we and the German people really know about Angela Merkel?”

At Leipzig University she became one of the leaders in the FDJ. Merkel distinguished herself by devoting a year to study of Marxism-Leninism’s foundations for students, according to the weekly Junge Welt. Thus, the road was open to becoming head of the FDJ’s local department for Agitation and Propaganda at the Academy of Science, the Institute of Physical Chemistry in Berlin, Adlershof. It coincided with the intensification of propaganda activities by the GDR regime in order to counteract the influence of Solidarity in Poland and to campaign against NATO’s Double Track Decision on medium-range nuclear missiles in West Germany. GDR propagandists studied techniques from the 1930s to improve their ability to fanaticize the GDR population in favor of the socialist system.

Merkel’s father had many privileges as part of the nomenklatura. The family had two cars! According to Merkel her father had a large library, with books usually not available to ordinary GDR citizens. Merkel eagerly read books by Marcuse and left-wing critics of the GDR like Robert Havemann and Rudolf Bahro. She befriended Havemann’s son, Florian, who later fled to West Germany.

Merkel also visited the home of Robert Havemann, who endured a glorified house arrest, constantly monitored by the Stasi. Havemann had ideas about ecology and zero growth that go back to the German nature-romantic tradition that characterized the Artaman movement at the beginning of the century. They were not far from the ideas of the Greens of West Germany though not popular in the GDR communist party. On the face of it, it is hard to understand why a careerist/opportunist like Merkel was staying in contact with the likes of Havemann and his son. But here she found her ideological base.

Merkel’s surname comes from her marriage to a fellow student, Ulrich Merkel, when she studied physics in Leningrad in 1977. Their marriage ended in 1982. According to Merkel, the GDR system needed a socialist renewal. When Mikhail Gorbachev was appointed Secretary General of the Communist Party of the Soviet Union in 1985, she belonged to those who saw opportunities in a renewal of the communist system through perestroika. This was actually an old idea of Lenin’s, who conducted the New Economy Policy in the early 1920s. The goal was to get access to foreign capital and technology and thus strengthen the Soviet Union. Merkel became a perestroikaist with an ecological leaning.

Gorbachev gave a speech to the top leaders of the Warsaw Pact in Budapest in June 1986 after the Chernobyl accident. He spoke of the need to reform the economy, using competition and market forces to become more effective, and also to care better for the environment. The communist leadership in the GDR was not particularly interested in these new ideas.

The head of the Stasi foreign intelligence division, Markus Wolf, was officially told to retire in 1986. This was a cover so that General (three stars) Wolf could build a new political structure in the GDR that could implement Gorbachev’s visions even against the will of the ruling party. Wolf was considered by others in the intelligence community as a master of deception. His memoirs have been published in English and German. The content and message, for each language, is different because he had two different audiences to manipulate and influence.

Outwardly, Merkel held a low profile and devoted herself to research in physics with her new husband, Professor Joachim Sauer. He was a leading light in the field of quantum physics. With Sauer’s prominence, the pair of Sauer and Merkel were allowed to travel to the West for conferences from 1986 and at one point stayed in the West and did research for six months. Merkel also met her grandmother in Hamburg on a private trip. For a childless couple active in important scientific research, this opportunity to travel was very rare.

For a long time Merkel denied that she had ever been to the West before the fall of the Berlin Wall of 1989. It was only when confronted with hard evidence of her and her husband’s Western voyages by biographers and journalists that she recovered these memories. For someone hailed by admirers as having a mind like a computer, this indicates that she has not always been honest and told the truth. Travel to the West was a favor only offered to particularly reliable Reisekader (literally Travel Squad). This was a privileged minority required to provide written reports of where they had been, who they met, and what they discussed. No reports of Merkel’s Western voyages have been found in the Stasi archives since the fall of the wall.

And there is at least one more document missing. A Ph.D. student in the GDR was not judged only by her specialist knowledge; political reliability was also important in order to be approved. Therefore, before the dissertation, they would write a fifty-page essay, Sozialistische Lebensweise (The Socialist Way of Life). The Ph.D. student would describe her own attitude toward socialism and the system. Merkel’s essay has never been found, despite the fact that many journalists have tried to obtain it.

When the Berlin Wall broke open on the evening of Nov. 9, 1989, it was the beginning of the end of the Communist Party in its then form. New “reform-friendly” forces that followed Gorbachev’s direction took over. There would be free elections in the spring of 1990. Merkel joined the Democratic Party Revival Party, led by a good friend of her father, Wolfgang Schnoor, a lawyer. The party motto was Aufbruch—Sozial—Ökologisch (Renewal—Social—Ecological). Merkel became Schnoor’s press officer. The party was part of an election alliance with the East CDU (Christian Democratic Union) led by the lawyer Lothar de Maizière.

A couple of weeks before the election, the weekly Der Spiegel revealed that Schnoor had been a secret informer for the Stasi for many years. So the party received only 0.9% of the votes in the elections of 1990. Merkel then transferred quickly to East CDU, becoming deputy press secretary to de Maizière. East CDU had received 40% of the vote. Lothar de Maizière was active in the church and a friend of the Kasner family.

De Maizière became prime minister in the last GDR government, leading a coalition. On Oct. 3, 1990, the two halves of Germany were reunited and the East CDU was merged with the West CDU. Mr. de Maizière became a minister without portfolio in Helmut Kohl’s government and vice chairman of the CDU Party. Der Spiegel soon revealed that even Lothar de Maizière was a long-standing informant for the Stasi under the cover name “Czerni.” Almost all leading people from the East CDU party were revealed as having been informers for the Stasi, leaving Merkel as the only one untainted. Merkel had become a member of the Bundestag on Dec. 2, 1990. She succeeded Lothar de Maizière as vice chairman of CDU, without ever having applied for membership of the party. Helmut Kohl appreciated Merkel’s fast intellect, industry, and ambition. So she was soon appointed to the position of minister for families, despite being childless and living with her partner, Professor Joachim Sauer, without being married.

In 1994, Merkel was appointed federal minister of the environment. Her overall ambition was to combat anticipated climate change. She organized the first U.N. conference on climate, COP 1 in Berlin in April 1995. Both Merkel and Helmut Kohl spoke in their introductory statements about carbon dioxide as “climate poison carbon dioxide.” As a Ph.D. in physics, she should have known that carbon dioxide at levels of 400ppm is not a poison. Only at concentrations of greater than 5% (50,000ppm) is it toxic.

The climate issue perfectly suited Merkel, if her aspirations were to change Germany and the world according to ideas developed by Hermann Flohn and Green Socialist ideologists like Bahro, Harich, and Havemann. With her position as a minister in the governing CDU party, she could have much more influence on policy in Germany than as an activist in the Green Party.

Merkel fully committed herself to negotiating the Treaty of Kyoto to combat global warming. It implied binding emission limits for Western industrialized countries with no requirements at all for developing countries, such as China and India. She collaborated with Vice President Al Gore about Kyoto, but soon realized that Mr. Gore was mostly out to enrich himself. He lacked ideological conviction. The United States did not, in the end, ratify the Kyoto agreement.