Messieurs, Ship Some Burkinis Over Here 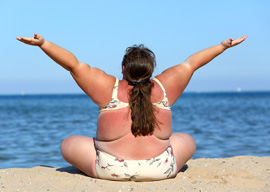 Can we borrow some?

It’s hard to find any American police officers who will walk up to sunbathing women and make aggressive comments about their body”and for good reason. They”re gonna get a verbal smackdown, not just from the lady in question, but from any female within earshot.

Oh, sure, we”ve got the Thong Police in Myrtle Beach, where the delicate souls on the city council have outlawed any garment that makes more than 51 percent of the bewtock visible. But those cops are fresh-faced Boy Scouts in Bermuda shorts on three-wheelers who mostly just have to carry plenty of plastic wrist restraints, since the thong-wearing beach babes of South Carolina, some of them outweighing the cop by a hundred pounds, are almost always guaranteed to put up a fight.

“You need to cover that up!” the cops yell from their all-terrain vehicles.

“That’s ridiculous!”””ridiculous” being a word police officers don”t like to hear when they”re surrounded by agitated crowds going, “Hey, this is cool, get out your cell phone camera, let’s see what he does next.”

And he usually gives one more warning.

And they refuse. The idea is just too bizarre for any Southern gal to make the correct decision in the brief amount of time they have to understand that (a) a cop has accosted them, (b) he’s looking at their thong bikini, (c) there’s a law here about thong bikinis, (d) he’s actually going to enforce the law, (e) he has no sense of humor, and (f) he used the word “jail.”

“There are at least thirty municipalities in France that have outlawed the burkini”those things have to be piling up in evidence lockers.”

I mean, the brain of a woman who spent 45 minutes finding that thong at Target can”t process the complexity of the situation.

So they say “Screw you””and actually end up in jail.

That’s why I think we need some officers from the CÃ´te d”Azur to strap on their duty pistols and get over here and do some on-site training”because I”m enormously impressed by what I”ve seen this past week. I was especially dazzled by the photo of the four officers in bulletproof tactical vests who surrounded the woman on a Nice beach and stood there, transfixed, while forcing her to remove her burkini. They had riot batons. They had radios. They had sidearms. And most impressive, there were four of them. Overwhelming force combined with the element of surprise”there would be no backtalk from this woman.

But the place I want the French burkini SWAT officers to start is here at Gunnison, the only nude beach in New Jersey, where as many as 5,000 buck-nekkid citizens can be seen on a weekend, where there are no fences, where it’s not always clear where the regular beach ends and the nekkid beach begins, and so…holy whangdoodle, I just saw that and now I can”t unsee it!

Let’s go totalitarian on this place and make people go down to wherever Hillary Clinton shops and buy some soccer-mom muumuus. Better yet, there are at least thirty municipalities in France that have outlawed the burkini”those things have to be piling up in evidence lockers. Send “em over here so we can cage some cellulite because, as much as I like the idea of a nude beach, the reality makes you wonder how it’s possible for human beings to procreate in the first place. The only reason Jersey has this one nude beach is that it’s on federal land, part of the old Fort Hancock, which is best known as an abandoned gunnery range””Is that a particularly large seashell or World War I shrapnel?””and for being one of the last breeding grounds of the piping plover. The piping plover is a sparrow-size shorebird with orange legs and a black band across its forehead, like a midget ninja dungeon master. They can”t really figure out why it’s so hard for the piping plover to breed, but I think it’s because the males take one look at Gunnison Beach and go, “Okay, sorry, babe, no sex this week. We”ll do eggs next year.”

The burkini, which was invented in 2004 by a Lebanese-Australian woman named Aheda Zanetti so that women could go into the water without violating Muslim laws, retails for anywhere from $45 to $110, depending on what features you want on it, and has to be purchased at a specialty store or, more likely, ordered by mail, so the women who show up in full, flowing burkini regalia have gone to quite a bit of trouble to annoy the ProvenÃ§aux. The idea of swimming in a dress is actually nothing new”up until 1880 that’s what all women wore at the beach, and those old ones were made of wool or flannel, which had to be absolutely no fun for synchronized swimmers.

But, of course, the French feel like they know what they”re talking about because they invented the bikini shortly after World War II and then were mostly responsible for its gradual miniaturization to the point that it outrages the denizens of coastal Carolina while becoming cheaper and lighter as the top half disappears entirely. Hence you end up with the Riviera tradition of unloosed bazoomas, which is a good idea if your chaise longue happens to be positioned next to a Romanian prostitute recently purchased by a Russian oligarch, because when she gets back from using his American Express platinum card at the Balenciaga boutique, she’s likely to oil herself up for an hour and then slither around on a Versace towel like a languid cheetah. Unfortunately, very few of us frequent the roped-off complimentary”hors d”oeuvres promenade of the Hotel Negresco, so we end up on Plage Peasant, accessible by bus twice a day from the famous HÃ´tel de Victime d”un Crime, which we found on Expedia. And let me just say: Gazonga quality declines in direct proportion to the distance of the beach from the Monte Carlo casino. Topless sunbathing is, in general, not a good idea for anyone who hasn”t worked as a fit model in the Garment District or danced at the Cheetah Lounge in Atlanta.

Lest I be misunderstood, let me make it clear that I”m in favor of all forms of beach attire, including the absence of beach attire, even in the instances when full frontal can cause permanent brain damage. Which brings me to the topic at hand:

Why are the French so pissed off about the burkini?