Mexico, as It Is and Wasn’t: Some Stuff Worth Knowing 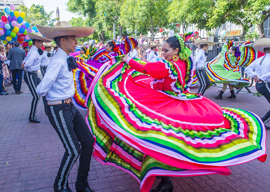 For Americans concerned about Mexico and Mexicans, and what sort of wights they be, a little history may help. We seem to know almost nothing about a bordering nation of 130 million. It is not what most of us think it is. It is certainly not what the Loon Right would have us believe.

For many years, until 1910, Mexico was run by Europeans, lastly under Porfirio Diaz, for the benefit of Europeans. Literacy was extremely poor, with economic conditions to match. The country was indeed, to borrow a favorite phrase of those hostile to Latin Americans, a Third World hellhole. Many nations then were, to include China.

In 1910 the Revolution broke out. It was godawful, as civil wars usually are. It ended in 1921, followed shortly by the Cristero religious war until 1929. This had the usual hideousness favored by religious wars.

It left the country devastated. It hadn’t been much to start with, but now it was a wreck. Aldous Huxley, writing in 1934, saw no improvement. (Beyond the Mexique Bay) At least until 1940 much of Mexico was barely civilized, unlettered, lawless, and poor. Things were not all that swell in 1970.

“Anyone who actually lives here can see that the country continues to change at a high rate.”

Mexico today has a large number of universities (the Technológico de Monterrey, a premier engineering school, has some thirty campuses in as many cities: Is that one university or thirty?). Mexico graduates well over 100,000 engineers a year, including 13,000 in software, and has a rapidly growing high-tech industry with centers in Guadalajara and Mexico City. Major American firms, to include IBM, Oracle, and Intel, come here to hire them.

And of course internet, airlines, computerized everything, and teenagers pecking at smartphones.

This is a lot of change in less than a man’s lifetime. Those hostile to Latin Americans do not want to know this, and usually manage not to.

In many ways Mexico remains a mess, mostly because of organized crime and corruption. Distribution of wealth is badly unequal, being now what the U.S. is becoming. Books could be written about what is wrong with the country. Finland it isn’t. But neither is it remotely a “Third World hellhole,” despite the squalling of such authorities as Ann Coulter, Manhattan’s premier she-ass.

It would be a good idea to retire the phrase “Third World.” Any designation that includes both Buenos Aires and Haiti (I have spent time in the slums of Cité Soleil with the U.S. Army) is so broad as to be without meaning. In 1930, China, Mexico, Thailand, and so on could reasonably have been called hellholes. None of these even comes close today. The slums of India do, as does much of Africa, yes.

To grasp the degree of educational advance between the Mexico as it was and as of 1940 and today, look at what is visible on the ground:

Go into an ordinary bank, with which Mexico is littered. The clerks have to understand exchange rates, intermediate banks, SWIFT codes. They sit at computers, which are networked within the bank and with national headquarters, requiring network engineers and software weenies. Multitudinous ATMs require network people and maintainers. Telmex, the quite good telephone monopoly, needs people to program and maintain switches and associated software. So do Telcel and ATT, cell-phone providers. Airlines need pilots and trainers of pilots, people to run and maintain high-bypass turbofans and avionics, the instrument-landing systems (ILS). The internet needs software people, router techs, help-line techs when someone’s modem fails (the techs are good). Also doctors and dentists, universities to train them, people who understand and maintain MRI gear, the usual elaborate diagnostic instrumentation, mechanics to run the diagnostic computers at car dealerships and understand what lurks under the hoods of today’s cars (which would baffle Stephen Hawking). And so on at great length. Similar observations could be made of many Latin American and Asian countries. Starting from roughly zero a few decades ago.