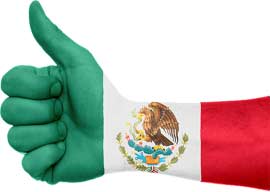 The most feral and violent contingent of anti-Trump protestors appears to consist of unabashed Mexican supremacists falsely accusing Trump of being a white supremacist. They are so irreparably dim that they appear to believe that by stomping on cars, throwing rocks at police, and sucker-punching white people, they will finally quell all doubt about whether they deserve to be here.

Behold the parallel-universe specter of hateful assholes hatefully screaming and hatefully attacking people while toting placards that read STOP THE HATE. Even more absurd is the specter of people who ran screaming from the flaming abyss that is Mexico proudly waving Mexican flags in the USA.

The most unhinged anti-Trump street riot so far occurred on June 2 outside his rally in San Jose, CA. Mexican flags were waved, Trump hats were burned, women were pelted with eggs and water balloons, men were sucker-punched, and white Trump supporters were chased and attacked like beasts of prey.

In every case, assailants or their enablers were seen waving Mexican flags, a symbol of the fierce pride that was sorely insulted by Trump’s candidacy.

“If you’re so proud of Mexico, why are you here?”

San Jose’s police chief Eddie Garcia told his men not to intervene in the violence. He implausibly claimed that 250 cops were unable to handle an estimated 400 rioters. He is also, as luck would have it, a proud supporter of La Raza. In other words, a Latino cop who supports a pro-Mexican racial-identity group told his men to stand and watch while Mexicans beat up white people. San Jose’s Latino mayor blamed the violence on Trump rather than the actual perpetrators of the violence.

Outside a Trump rally in Anaheim late in May, a protestor said:

The question begs itself, and I’m hardly the first to ask it: If you’re so proud of Mexico and America maltreats you so horribly, why are you here?

Rather than dare to honestly answer any of these questions”possibly because any honest answer would induce humiliation rather than pride”they insist that America was “stolen” from them.

Land that is won in a war is not “stolen.” The fact is that in what is now known as the entire American Southwest, a grand total of only 10-15,000 mestizos occupied the land when Anglos took it by force. But that was the 1840s”these days, there are single weeks where more than 10,000 Mexicans illegally invade the United States. And the nation of Mexico had only claimed that “stolen” land in the 1820s. By the time the Mexican-American War rolled around, its inhabitants totaled an estimated one percent of Mexico’s population. And, perhaps most humiliatingly, the scant technology they enjoyed had been brought to them by their Spanish conquerors. The country they’re allegedly “reclaiming” is so much more advanced than it was when a tiny smattering of their distant ancestors occupied it, it’s not even funny. All right, it’s a little funny. OK, it’s hilarious.