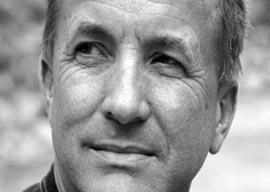 Of all the people I”ve tussled with in my professional life, Dr. Michael Shermer, bestselling author and professional “skeptic,” draws the least amount of sympathy from me. I don”t know what makes me so raw when it comes to Sherm. Maybe it’s that I just don”t think he’s bright enough to warrant his success. He should be a bumbling health teacher at East Cholo High, getting his tires slashed each week by students who lack the verbal skills to better express their disdain. But the media’s go-to guy on matters of science and skepticism? Columnist for Scientific American and Time.com? Head of the Skeptics Society with its 55,000 members? “Science expert” on the Colbert Report, Oprah, Nightline, Larry King, and the Fox Family Network? It’s like Barney Fife winning the Heisman. You have to shake your head and wonder, not so much why, but how (to be fair, I do kind of know how. Shermer got his first national TV guest appearance, on The Donahue Show in “94, through me…a decision I regret to this day).

In 2014, when Shermer sent his lawyers after my publisher to try to get my book pulled from publication, in the space of four hours I had them waving the white flag and running away. I thought this clear-cut victory might quell my Shermer-hatred, but damned if he doesn”t always find some new way to get under my skin.

Last week, he raised his voice in support of a recently-announced but yet-to-be-implemented policy change by Google to no longer rank websites based on traffic, but rather on “facts.”

As described in an article from New Scientist that Shermer posted on his Facebook page, “A Google research team is adapting a model to measure the trustworthiness of a page, rather than its reputation across the web. Instead of counting incoming links, the system “ which is not yet live “ counts the number of incorrect facts within a page.” The extent to which this new system is ready to be implemented depends on which tech site you read. Nevertheless, Shermer cheered the news: “Facts, not links. Now there’s an idea whose time has come! Google wants to rank websites based on facts not links.”

“I suspect that, should the Google “incorrect facts” plan ever launch, Shermer will be perplexed by his diminished search rankings.”

I”ve read the paper published by the developers of this new “trustworthiness” model. The gist is, the program developed by these brainiacs, led by Google “research scientist” Xin Luna Dong, is supposed to penalize sites for individual inaccuracies, rather than subject matter. In other words, it’s much more complex than trolling for keywords like “chemtrails” or “Bigfoot.” The Dong Team claims to be able to scan pages for “incorrect facts” (their term).

Before I get to Shermer, let me illustrate exactly why this whole idea is nonsensical. If the rankings are going to be determined by individual errors per page, no source will suffer more than “mainstream” newspapers. Writing in the fall 2009 journal of Harvard’s Nieman Foundation for Journalism, Scott Maier of the University of Oregon School of Journalism and Communication reported on his “accuracy audit” of 22 major newspapers. Maier stated that he “found an error rate among the highest in seven decades of accuracy research: over 59 percent of local news and feature stories were found by news sources to have at least one error.” Maier added, “In a follow-up study, I tracked 1,220 news stories identified by news sources as being factually flawed. Of those, corrections were published for 23 of them, a corrections rate slightly below two percent.”

Even on his worst day (in other words, every day), Alex Jones couldn”t cook up as many factual errors as a typical mainstream paper.

Of course, there’s no way Google is going to allow the Boston Globe or L.A. Times or Washington Post to be demoted in search rankings, so the way around that is to structure the “trustworthiness” model to gauge the number of inaccuracies in comparison to the total number of stories published. In this way, three Alex Jones errors “matter” more than twenty L.A. Times errors, because the Times is bigger and publishes more content.

And voila, we”re right back to where we are now, with popularity and size dictating search rankings instead of the number of “incorrect facts.” The Dong plan is flaccid and underdeveloped. It”ll need some hands-on polishing if it’s not to prove hopelessly dysfunctional.

Which brings us to Shermer. Knowing the man as I do, I can”t help but think that his blind enthusiasm for the “incorrect facts” plan stems from a smug belief that he would somehow benefit from it. As non-introspective a human as I”ve ever met, I doubt Shermer has, for even a moment, considered that he would actually be among those “demoted” via the new scheme.

If we rank Shermer merely on what he’s said about me over the years, he makes Alex Jones look like a paragon of honesty if we rank based on “incorrect facts” (the model that Shermer champions) as opposed to overall nuttiness. Shermer’s not nutty; he’s just dishonest.

In a recorded interview with Holocaust revisionist Richard Darman, Shermer admitted “misleading” his readers about me and my work:

Darman: Well, David Cole is not racist, is he?

Shermer: No. And I didn”t say that about David. He’s not the least bit racist…

Darman: But in your article you listed a bunch of . . .

Shermer: Yeah, I”d already listed a bunch of racists, a bunch of them together, and I threw Cole into that bunch because I was listing everybody I had interviewed, and that was probably the biggest, uh, misleading, the most misleading thing I said in my article. I should have left Cole out of that … Maybe Cole’s right. I think the whole gas chamber story is probably, in terms of physical evidence, the weakest link in the whole story. To me, it doesn”t matter whether the gas chamber story is completely true or not. Maybe it could be modified, for all I know . . .