Michelle Fields Is Not Black and Blue 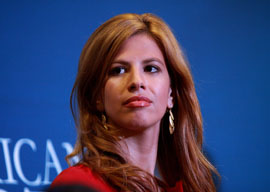 When #TheDress became a viral sensation last year, you had people who were absolutely positive the dress was gold and white while others looking at the same picture were just as sure it was black and blue. It was a stupid meme, but it dominated the news cycle and had family members screaming “Are you fucking blind?!” at each other. The same thing is happening with this Michelle Fields case. I see a woman gingerly moved out of the way, while almost everyone I know sees a woman being assaulted.

There is plenty of photographic and video evidence of the exchange, but it doesn”t seem to affect people’s perception of what happened. Once again, the more we are confronted with evidence that contradicts our beliefs, the more steadfast we are in those beliefs. The initial videos show a close-up of Fields touching Trump, and an aerial view was released by police this week that shows more details. What is irrefutable is that on March 8, after a press conference in Jupiter, Fla., Breitbart reporter Michelle Fields approached Donald Trump and was moved out of the way by Trump’s campaign manager, Corey Lewandowski. There is audio of Fields acting like it was a big deal to The Washington Post‘s Ben Terris, but I was happy to get on with my day a few seconds after seeing the first video.

“Why do you get to improvise a one-on-one with someone who may very well become the leader of the free world?”

Instead, the hounds were unleashed and Michelle’s story hasn”t left the public eye since. Ben Shapiro quit his job at Breitbart because they weren”t supportive enough of Fields, and Dana Loesch and Greg Gutfeld appear to be equally outraged at the Trump camp. I like all these people more than a friend and can”t understand how they”re seeing something I can”t. I had Shapiro on my show to discuss it and his response was “Oh, so you”re admitting she was touched, you just don”t see it as a big deal.” I said, “Exactly,” because that’s exactly what I”m saying. It’s okay for people to touch each other. In fact, though the law states any unwanted touch can technically be called assault, there are special exceptions for crowded areas where someone is impeding your ability to get where you”re going. Fields put her hand on Trump’s arm. In her other hand she’s holding a strange object. The black-and-blue-dress people tell me it’s just a pen, but us white-and-golders have stared at it for a long time and a pen is one of the only things we”re sure it isn”t. It looks like a robot’s nipple and I”m guessing it’s a skin-colored PinMic (though I”m not sure why she”d need a mic in her left hand when she has an iPhone set to record in her right). Surely if someone impedes the destination of a presidential candidate and is carrying a device, his staff is allowed to move them out of the way. Trump gets regular death threats and the Secret Service had already warned her twice. You shouldn”t even go near him in a crowded room. If reporters have something to say, get it in during the press conference or give up. You couldn”t stop David Lee Roth after a concert to record a question. Why do you get to improvise a one-on-one with someone who may very well become the leader of the free world?

These are all facts and I don”t see how anyone can argue them. Fields posted bruises on her arm and Dana Loesch’s husband asked me, “What if it was your wife?” If it was my wife, I”d want to know why she was abandoning the kids to go travel to a press conference and push the limits of journalism. I”d want to know why she’s making the news about her and not just reporting it. Of course I”d feel visceral anger when I saw the bruises on her arm, but I hope I”d be rational enough to get beyond that and try to figure out how she got them. Gutfeld is no fan of Trump and assumed I was covering for Fields because I”m so blindly in the tank for the Donald that I can”t see straight. I”m at the point where I want to return to LensCrafters and make sure they got my prescription right. When police arrested Lewandowski for assault on Tuesday, I was surprised. If he is convicted, I”ll be stunned. Critics say Lewandowski lied when he said he never touched her, but he likely just forgot. This event is one of the least memorable moments in American history.