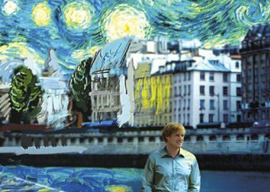 Satire is a reactionary art form powered by contempt for the present. Although Woody Allen, now 75, has always espoused conventionally liberal views, he’s one of the last figures in American culture unaffected by the 1960s” faux egalitarianism.

Having turned 21 in 1956, Woody’s enthusiasms remain those of a cultured mid-century New Yorker. In his famous speech at the end of 1979’s Manhattan on what makes life worth living, Allen references Mozart, Flaubert, CÃ©zanne, Louis Armstrong, Groucho Marx, Marlon Brando, Frank Sinatra, Willie Mays, and Ingmar Bergman”in other words, nobody from the 1960s or 1970s. Like Ralph Lauren, Woody Allen has always been an old-fashioned snob.

In his delightful new romantic fantasy Midnight in Paris, Allen takes on a challenge similar to Evelyn Waugh in Brideshead Revisited: recreating a vanished golden age. To Woody, it’s the 1920s Paris of the Lost Generation modernists.

Midnight in Paris stars Owen Wilson (Wedding Crashers) as The Woody Allen Character: a well-paid but artistically frustrated Malibu script doctor named Gil who is struggling to finish his literary novel about a nostalgia shop. This is less of a stretch for Wilson than you”d think: Before getting sidetracked into Hollywood stardom, the blond Texan star cowrote Wes Anderson’s first three movies. Here, Wilson’s guileless boyishness and prep-school politeness make him hugely likable in the role of a kvetching rich guy. Gil is vacationing in Paris with his unappreciative fiancÃ©e (Rachel McAdams, her hair dyed blonde and tousled to look like Allen favorite Scarlett Johansson).

Woody’s modern Paris looks stereotypically superb. Allen sets his camera exactly where generations of postcard photographers have stood to shoot the Eiffel Tower, the Paris Opera, and Montmartre’s Basilique du SacrÃ©-CÅur. Not surprisingly, the only modern Parisian landmark that meets Woody’s approval is I. M. Pei’s glass pyramid addition to the Louvre. The inside-out 1977 Centre Pompidou is conspicuously absent.

In contrast to Jonathan Demme’s 2002 dud, The Truth About Charlie, which exulted in a multiracial Paris that didn”t seem much different from Houston, Woody has no interest in the Paris of immigrant Muslim youths setting cars on fire. His Paris, like his New York, is 95 percent white, with the remainder stylish blacks.