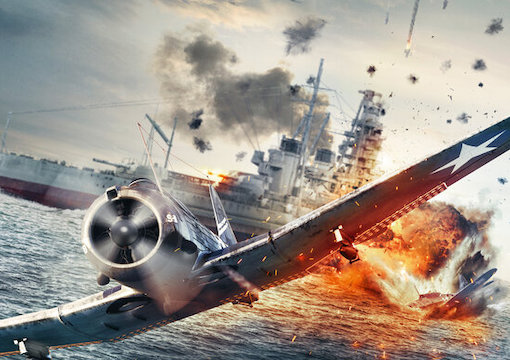 Midway is a surprisingly accurate and competent WWII movie about the most thrilling naval battle in American history. While only 38 percent of film critics gave the film a thumbs-up, 92 percent of its audience approved. It doesn’t rank with the best films of 2019, but gay German blockbuster director Roland Emmerich (Independence Day) and screenwriter Wes Tooke wrestle a huge amount of history into a lucid and moving tale.

While today it seems inappropriate, even racist, that the USA defeated a Nation of Color in the War in the Pacific (1941–1945), Americans used to be hugely proud of our triumph. Up until Steven Spielberg’s landmark 1998 D-Day movie Saving Private Ryan, Hollywood may have devoted more attention to the U.S. WWII effort in the Pacific than in Europe.

When I was a kid watching black-and-white movies on television, the single most repeated scene in Hollywood history had to be a shot of swing jazz emanating from a floor radio on a peaceful Sunday in December 1941, then an announcer saying, “We interrupt this broadcast…”

While the Roosevelt administration saw Germany as the larger threat, the public wanted revenge on Japan first. Luckily for FDR’s strategy, four days after Pearl Harbor Hitler declared war on the U.S. for no particular reason other than general Hitlerosity.

One reason there were so many old movies about the war with Japan was because the U.S. was never the outgunned underdog in fighting the Germans, as we cautiously worked our way up through battling them in peripheral North Africa from late 1942, in Italy in 1943, and only finally daring to confront the Wehrmacht on the vast Northern European plain in mid-1944, by which point American industrial production was overwhelming.

In contrast, for the first six months after Pearl Harbor, the U.S. was very much on the defensive against Japan, which conquered about one-eighth of the world’s surface. Japanese aircraft carriers attacked Hawaii in December, Australia in February, and Sri Lanka (over 8,000 miles from Pearl Harbor) in April 1942. Where’d they strike next was a mystery.

In reality, however, these sudden successes stretched thin Japan’s limited modern economy. Wartime Japan could not replace its losses of trained pilots and technicians, while America proved to have an endless supply of shade tree mechanics who’d grown up working on Model T’s and who quickly adapted to mechanized warfare.

In the first six to twelve months of a war with the United States and Great Britain I will run wild and win victory upon victory. But then, if the war continues after that, I have no expectation of success.

Right on schedule, just under six months after Pearl Harbor, on June 4, 1942, the Japanese navy met their nemesis.

Today, though, the Battle of Midway is remembered mostly indirectly through its science-fiction descendants. Star Trek’s U.S.S. Enterprise was named after the aircraft carrier that stars in this ensemble movie, while the attack on the Death Star in Star Wars is a WWII air-raid movie. Likewise, Rogue One, perhaps the least annoying of the recent Star Wars films, ends with a mash-up of the 1942 Battles of Midway, Guadalcanal, and Stalingrad.

With military history having largely been excised from textbooks for fear that boys might find it interesting, it’s not surprising that many critics assumed that Midway’s screenplay couldn’t be accurate.

But it’s reasonably reliable. As William Goldman pointed out, there were so many heroic incidents during any one World War II battle that the screenwriter’s challenge is less to invent amazing stories than to leave out most of the ones that actually happened.

Most strikingly, the filmmakers didn’t bother concocting any diversity. In contrast, in the 1976 all-star Midway, Charlton Heston’s son falls in love with a Japanese-American girl whose family is being interned.

As the new Midway makes clear, the American culture of liberty and free expression proved superior in wartime to the Japanese traditions of rigid hierarchy and fear of sharing bad news with the boss. The Japanese militarists became increasingly dysfunctional under stress due to their shame at losing face.

In the movie’s funniest scene, strike-force Admiral Nagumo complains to supreme Admiral Yamamoto that a junior officer playing the Americans in a board war game of the upcoming battle had deviously defeated him by having his American aircraft carriers lurk off Midway Island as if they knew the Japanese were coming. Yamamoto informs the impudent subordinate that the Yanks cannot possibly know that the Imperial navy is on their way, so he must play fair and let Admiral Nagumo win.

But the Americans did know. Our more democratic culture meant that Admiral Chester Nimitz (played by Woody Harrelson) would listen to the odd array of talent he’d assembled, most important, the nerdy Navy code-breaker Joseph Rochefort, who had put to work the brass band from the damaged battleship California to decode Japanese radio messages.

When Rochefort told Nimitz that the preponderance of intercepted evidence suggested that their target code-named “AF” was Midway Island 1,200 miles northwest of Pearl Harbor, the admiral demanded proof.

Rochefort’s staff devised an experiment: The Marines on Midway would radio in plain English that their water desalination system had exploded and that they’d be out of drinking water by mid-June. Shortly, Rochefort’s crew intercepted a Japanese message to load more desalination equipment onto the invasion fleet.

On the other hand, we shouldn’t pat ourselves on the back too much over our superior culture. The movie skips over the disgraceful subsequent events in which Rochefort’s jealous rivals in the Washington naval bureaucracy quickly ruined the career of this Alan Turing of the Pacific. The Navy didn’t officially acknowledge his heroism until 43 years later.

The Japanese never actually had a strategy for defeating the vast USA other than to be brave and demoralize the cowardly gaijin.

But the April 1942 Doolittle Raid (Jimmy Doolittle is played by Aaron Eckhart) panicked the Japanese high command. Sixteen B-25 bombers, a ground-based plane too big to land on a flattop, flew off the carrier Hornet and bombed Japan before the crews bailed out over China. Despite the only minor damage from what had been intended as a morale-boosting publicity stunt, the threat to the Emperor’s sacred safety from American carriers emerging from the empty Northern Pacific led the army to agree to Admiral Yamamoto’s plan to extend the Empire’s perimeter by conquering Midway Island.

Emmerich, by the way, raised much of his $100 million budget (a fairly limited amount for a story of such scope) from the Chinese, a rare recent example of the mainland Chinese doing something amiable.

In return, the Chinese investors received a brief mention in the film of the horrific reprisals the Japanese army took upon Chinese civilians for helping Doolittle’s Raiders escape. Incredibly, 73 of the 80 American airmen on what had seemed like a kamikaze mission avant la lettre made it home. The last surviving Raider, Doolittle’s co-pilot Dick Cole, died this April at 103.

Yamamoto, assuming that the U.S. Navy had only two working aircraft carriers left in the Pacific, the Enterprise and the Hornet, sent four carriers to lure the remnants of the American fleet into the decisive battle of the war.

However, a third U.S. carrier, the Yorktown, which had been badly damaged in the Battle of the Coral Sea in May 1942, limped into Pearl Harbor needing an estimated three months’ worth of repairs. But by the expedient of turning off the electricity for much of Honolulu to power the repairs, workers turned around the Yorktown in only 36 hours.

To this day, nobody knows what the Japanese would have done if they had won at Midway: perhaps raid the West Coast or try to seize Hawaii and take the wives and children of the American servicemen as hostages. (The Japanese military had a track record of doing whatever would make the rest of the world hate them the most.)

The U.S. had a huge number of carriers under construction, but the first of the 24 Essex-class carriers didn’t arrive in Pearl Harbor until eleven months after Midway. If Yamamoto had won at Midway, the war would then likely have ground on into the later 1940s, until the U.S. vaporized urban Japan with dozens of atomic bombs.

Although for much of the morning of June 4, 1942, it looked like they would.

As you might imagine, World War II was extremely expensive, so how to reproduce it on film has long challenged moviemakers. The 1976 Midway used mismatched WWII documentary shots plus outtakes borrowed from other movies.

In contrast, the new Midway is largely computer graphics. Each individual war machine is superbly accurate in detail.

On the other hand, Emmerich is more of an adept administrator than an artist. While Christopher Nolan put his unique stamp on WWII in Dunkirk, Midway visually reflects Emmerich’s familiar too-much-is-not-enough aesthetic.

Emmerich also used the old money-saving CGI trick of making the film rather dark. Thus, the subtropical Pacific on the Fourth of June is given an autumnal bronze tint, when in reality it was a glorious summer day. So Midway misses the irony of thousands of men dying on as lovely a morning as they’d ever seen.

Emmerich took the money he saved on processing to over-egg his pudding. He can’t resist cluttering each frame of his battle scenes with countless planes, even though in reality they dispersed more widely for safety by using the size of the sky.

For instance, Nagumo sent 108 planes to attack the American airstrip on Midway Island, where famous cowboy-movie director John Ford was shooting a documentary. During the attack (in which the director was wounded by shrapnel), Ford managed to capture a maximum of five enemy warplanes at once in a single shot. In contrast, Emmerich puts all 108 aircraft into one frame.

While the Japanese attacked the island, the Americans, under novice carrier commander Raymond “Electric Brain” Spruance, operating under the old military doctrine of “get their firstest with the mostest,” sent wave after wave of Devastator torpedo bombers followed by Dauntless dive-bombers against the Japanese carriers.

(Spruance, a battleship admiral who took over from the ill Bull Halsey, played by Dennis Quaid, only days before the battle, is given less screen time than he deserves. But it would be hard to make credible how Spruance somehow mastered carrier warfare command en route to Midway.)

The Japanese Zeros, perhaps the best fighter in the world at the time, overwhelmed the American torpedo planes approaching slowly just above the waves: 34 of the 41 Devastators didn’t come back. And all the scandalously bad American torpedoes that did hit the Japanese ships proved to be duds.

The third torpedo attack was over by 10:24 AM, and for about 100 seconds the Japanese were certain they had won the Battle of Midway, and the war.

The Zero pilots exulted at sea level as Nagumo’s crews armed his bombers with steel-piercing explosives to sink the American armada, turning the flight decks of the Japanese carriers into fireworks factories.

What happened next may have been the most dramatic turnabout in the history of war.

A problem with Emmerich’s maximalist visual approach is that because he insists upon indulging in all-out bang-bang-boom-boom every fifteen minutes throughout his movie, by the time he finally arrives at this climax of the entire war, he can’t quite top his previous fireballs.

Midway is a fine piece of history.