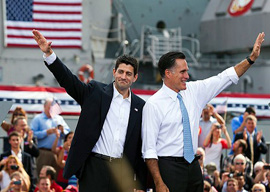 Mitt Romney’s decision to select Rep. Paul Ryan as his running mate speaks well of the man who made it. Indeed, it seemed less like the moderate man we have come to know than Adm. David Farragut in Mobile Bay:

“Damn the torpedoes! Full speed ahead!”

Facing sinking polls, endless attack ads on his tax returns and Bain Capital record, and venomous lies that he was culpable in the cancer death of the wife of a steelworker seven years after he left Bain, Romney decided to convert this dismal campaign into a stark choice of philosophies and policies. Picking Ryan, Mitt shoved his whole stack of chips into the middle of the table and sent this message to the American people:

“Friends, our country is in trouble. If we do not lift the burden of taxation, regulation and spending that has produced $5 trillion in new debt in four years, we are going the way of Spain and Greece.

“I have chosen this young leader Paul Ryan to be my partner because he has thought more deeply and read more closely into the causes and consequences of our fiscal crisis than any other man in Washington.

“Can they, will they reject the frightening picture that will be painted of Romney and Ryan’s America?”

“Now President Obama says his approach to solving America’s fiscal crisis has ‘worked.’ If you believe that, go ahead and vote for him.

“But Paul Ryan and I believe that 42 straight months of 8 percent unemployment, $5 trillion in new debt and trillion-dollar deficits staring at us all the way to the horizon is a course to fiscal and financial ruin. He and I do not believe America can survive many more years of what Barack Obama has produced and promises to produce.

“We are offering America a different direction from the radical-liberal path of Obama, Nancy Pelosi and Harry Reid, where the federal government consumes a fourth of the entire economy. We are offering a Romney-Reagan-Ryan conservative road to prosperity.

“I am not going to tell you this will not involve sacrifice. But if you believe this country needs a course correction, then we are asking you to take a chance with change to restore an America where our children can anticipate the better future we all could when we were growing up.

“You know and I know there is something fundamentally wrong with the direction in which we are headed. And the proof lies in the grim statistics that keep coming in month after month after month.”

Romney’s choice of Ryan makes the election of 2012 not only a report card and referendum on Obama, but a clear choice between philosophies.

Obama believes government is the engine of prosperity. Romney and Ryan believe people, private institutions, entrepreneurs and businesses are the creative and energizing forces in society.

And what a difference four years have made in this president.