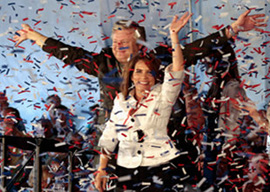 Last week’s Republican debate at Ames, Iowa, and the straw poll Saturday did more than sort out the Republican field for 2012.

They have given the nation a good close look at a Republican Party that no longer resembles the Bush-McCain model.

Consider. Michele Bachmann and Ron Paul, who garnered nearly 60 percent of the votes cast, were both among the two dozen House members who voted against the final bipartisan deal to raise the debt ceiling. Neither blanched at shutting down the U.S. government.

At the debate, every Republican onstage raised his or her hand when asked whether he or she would reject a budget deal in which $10 in spending cuts were offered for every dollar in higher taxes.

This is a party whose feet are set in concrete. The United States government will be downsized and tax rates will rise only over its cold dead body. This is Reaganism on steroids.

Every other candidate had been in Iowa organizing before she ever got into the race seven weeks ago. Yet she emerged with nearly 5,000 votes, the largest total ever amassed in an Iowa straw poll, with the single exception of George W. Bush’s tsunami in 1999.

“The warfare state is now on the chopping block, thanks to the principled relentlessness of Ron Paul.”

While virtually every candidate shares Bachmann’s social and economic conservatism, none matches her fire and passion. She both humiliated and eliminated Tim Pawlenty, a fellow Minnesotan who had been her governor when she was a state legislator.

She is now not only the favorite in the Iowa caucuses but also one of three front-tier candidates for the nomination.

Ron Paul, however, who ran only 150 votes behind Bachmann and doubled the vote of Pawlenty, has not received the attention or credit his tremendous showing deserves.

Four years ago, Paul, a libertarian legend, was winning every telephone poll taken after a GOP debate but failing to win, place or show in the primaries. He seemed to be campaigning simply to make his case, realizing that he had no chance of being nominated.

His views on foreign policy were regarded as aberrational by fellow candidates, such as Rudy Giuliani, when they were not being ignored.

In last week’s debate, Paul denounced U.S. intervention in wars that are none of America’s business, called for closing U.S. bases abroad and bringing our troops home, and squared off against former Sen. Rick Santorum on whether Iran represents a threat.