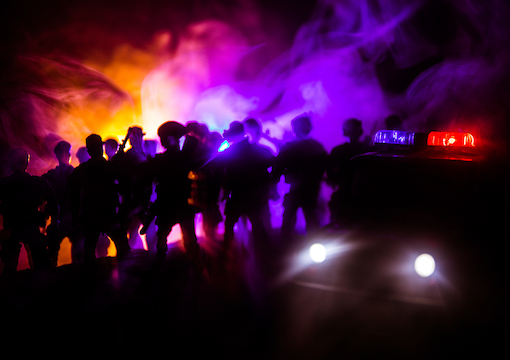 George Floyd, a 46-year-old black man, was killed Monday night after an incident that involved four Minneapolis police officers, who have since been fired. Video footage recorded by a bystander shows officer Derek Chauvin with his knee on Floyd’s neck as Floyd gasps for breath on the ground with his face against the pavement. The officer does not move for at least eight minutes, even after Floyd stops speaking and moving. Police had responded to an alleged forgery taking place. A man matching Floyd’s description allegedly used a counterfeit bill.

In response, there has been rioting and looting throughout Minneapolis. Social media users posted videos on Twitter Wednesday night that showed burning businesses and looters entering a local Target store and making their way out with bags full of items. Protesters threw objects including water bottles and rocks at police and firefighters during a fire that was started at AutoZone.

Near the 3rd Precinct, a Cub Foods, a liquor store, a Dollar Tree, and an auto-parts store all showed signs of damage and looting. Fire erupted in the auto-parts store, and city fire crews battled the flames. Protesters set other fires in the street and at an under-construction housing complex.

Vandalism, looting, and fires also occurred in the Uptown area. Businesses damaged include a Hi-Lake Liquors and the Apple Store.

A man was found fatally shot Wednesday night near a pawnshop. Asked to confirm reports that he had been shot by a store owner, police spokesman John Elder said that was “one of the theories.”

“Mob rule is not meant to be fair or rational.”

Joe Biden has called Floyd’s death a “tragic reminder that this was not an isolated incident, but a part of an ingrained systemic cycle of injustice that still exists in this country.” But though Floyd’s death is certainly tragic and unjust, there’s no evidence of “an ingrained systemic cycle of injustice” against blacks in this country. Biden’s words, if they serve any purpose, will be to excuse the mob rule that has occurred in response to Floyd’s death. And needless to say, there’s no justification for rioting or looting because of Floyd’s death.

Police chief Medaria Arradondo told the local Fox 9 TV station that he ordered the use of teargas after violence and looting. He said that he is committed to protecting the rights of people to demonstrate and most did so peacefully, but there have been groups committing criminal acts.

“Justice historically has never come to fruition through some of the acts that we’re seeing tonight, whether it’s the looting, whether it’s the damage of property and other things,” Arradondo said in the Fox interview.

Protesters also gathered Wednesday night at the suburban home of Derek Chauvin as well as the Minneapolis home of Mike Freeman, the Hennepin County prosecutor who would make a charging decision in the case. No violence was reported in those protests.

In another example of racial tension and mob rule, there is the fate of Amy Cooper, the white woman who called police on a black man in Central Park during an encounter involving her unleashed dog. Amy Cooper was walking her dog Monday morning while Christian Cooper (no relation) was bird-watching at a wooded area of Central Park called the Ramble. They both claim their dispute began because her dog was not on a leash, contrary to the Ramble’s rules.

Christian Cooper recorded video of part of their encounter and posted it on Facebook, where it has since been shared thousands of times and became a trending topic on Twitter.

“I’m taking a picture and calling the cops,” Amy Cooper says in the video. “I’m going to tell them there’s an African-American man threatening my life.” But no such threat was made. It was all in her head.

In comments to CNN as the video spread widely, Amy Cooper said she wanted to “publicly apologize to everyone.” “I’m not a racist. I did not mean to harm that man in any way,” she said, adding that she also didn’t mean any harm to the African-American community.

Still, Cooper was fired from her job at an investment management company on Tuesday. After an internal review, Franklin Templeton said it “made the decision to terminate the employee involved, effective immediately.” “We do not tolerate racism of any kind at Franklin Templeton,” the company added.

Even more strange, in a Facebook post, Abandoned Angels Cocker Spaniel Rescue, Inc. wrote that “the owner has voluntarily surrendered the dog in question to our rescue while this matter is being addressed.” Apparently, the “racist” woman is not fit to care for the dog!

It would be difficult to imagine more absurd circumstances than Amy Cooper’s. The woman was fired over a trivial private encounter that didn’t concern her performance in the workplace. And it’s doubtful that Franklin Templeton really cared about the issue of racism; most likely, they just wanted to protect their image, and thereby the company’s bottom line. However, our age of social media readily promotes just this sort of cheap thing. Immediately, Amy Cooper was made into a “Karen,” that is, an entitled white woman who calls the police for no reason. And while she may have been just that in regard to Christian Cooper, hers remains an unjust fate, for there is no proportion between her bad behavior and her firing, or the loss of her dog.

Of course, however, mob rule is not meant to be fair or rational. It aims to punish, as in the Amy Cooper example, or to allow people to vent their resentments and realize their passions and prejudices, as in the rioting and looting example. The death of George Floyd is certainly a great moral evil. But while people are rightly angry about it, they are not justified in vandalizing or taking goods from stores. Inevitably destructive, mob rule is no substitute for the rule of law, which alone can provide justice in Floyd’s case.