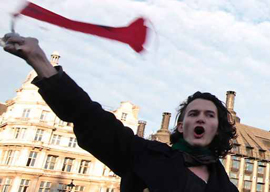 Dear old England. What a wonderful country we live in.

Change and decay in all around I see.

Europe is in a state of near-collapse. Chaos and rioting have run rife throughout the Middle East. The stock market has been blasted into free-fall. No matter, though. Today’s headlines in what remains of our newspaper industry prefer to focus on more important issues such as: the problems with the way we play football; public opinion over whether Sally Bercow, wife of the small but imperfectly formed Speaker of the House of Commons, should take part in the TV show Celebrity Big Brother; and Australian spin bowler Shane Warne’s face after Miss Hurley reportedly whacked a pint of Botox into him. Let us not forget Pippa Middleton’s bum—still up there with the best of them! If only I had taken a long-term position on her bottom’s exposure time, I would now be rich enough to be running with the gold bulls.

Maybe the newspapers are right—after all, what’s the point of complaining? Let’s imagine Berlusconi’s reaction as he watches Italy go up in flames: “Let it burn, let it burn,” he’d say, “bring on the teenage dancing girls and let’s have some fun!”

So while we are on the topic of what’s important, shouldn’t we spare a thought for poor Charlie Gilmour, the adopted son of an icon who finds himself sentenced to sixteen months in the slammer for rebelling, by God, pour encourager les autres? I suppose.“

Firstly, sending the kid to prison seems completely disproportionate to the crime. Secondly, it could ruin a burgeoning mind forever. That’s the real crime here.”

There are pedophiles, rapists, and violent criminals doing a third of the time to which young Gilmour has been sentenced, but the law is, of course, just and wise and must be respected. The lad is surely bound to benefit from a few months spent mixing with the riffraff he will meet over the breakfast table at HMP. He will, after all, be in the field of higher education, learning how to saw the barrels off a Purdey’s shotgun. Very useful! He might even be eligible for lessons in the arts—such as how to make a post-impression on a pretty face.

Firstly, sending the kid to prison seems completely disproportionate to the crime. Secondly, it could ruin a burgeoning mind forever. That’s the real crime here.

Whether our judges and politicians admit it or not—and they won’t because they don’t have the guts—thousands of perfectly decent, well-brought-up students experiment with drugs and go through revolutionary phases while at university.

Even David Cameron came as close as a politician dares when he said, “I did lots of things before I came into politics which I shouldn’t have done. We all did. Everybody is allowed to err and stray.”

I don’t know what planet the judge who passed sentence on young Gilmour has been living on—perhaps the wrong side of the moon—but his comment regarding Gilmour’s failure to recognize the Cenotaph was an all-time winner.

“For a young man of your intelligence and education,” he pontificated, “to profess to not know what the Cenotaph represents defies belief.”

Gilmour is a highly intelligent history graduate, so of course he knows what the bloody Cenotaph is, but the guy was reportedly off his head on a raging acid trip, had also downed a whole bunch of Valium, and then bent the lot with half a pint of hooch! He probably thought the Cenotaph was Noddy in Toyland, but I forgot—Noddy’s banned as well!

The truth is that the judge and people like him are not in touch with the youth of today. They need guidance.

To help remedy this, I append the first draft of Modern English as a guide to parents, politicians, and upholders of the law in the hope that it might help them understand the modern generation.

Modern English is an insider’s dictionary that explains anti-tradspeak for the uninformed:

A
Angel Dust…A thin trail of vapor left by angels after takeoff.

B
Black Bomber…A person of African descent who throws bombs.