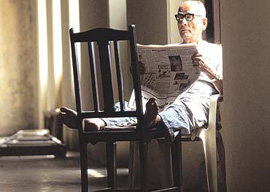 Bravo. Now have your diuretics and your hot milk drink, take your heart pills and blood-pressure tablets and your fistful of other prescription drugs, then we”ll provide an enema and influenza jab, change your dressings and diaper, bind your leg ulcer, and do fuzzy-felt shapes to counteract the Alzheimer’s. One thing we will not do is let you die.

God, it is so undignified. Visit a respite home or a modern cattle-pen for the aged, and you will be struck first by the rolling banks of urine fumes and then by the absurd pathos of it all. Here, an old man exposing himself; there, an ancient woman flashing her knickers at anyone who notices. I know people who, having placed their mother in a home, returned from doing the paperwork to find her being dry-humped by some old pervert (talk about settling in); I know another whose grandfather”a distinguished former general”was spotted running crazed and naked down a provincial town’s High Street.

And someone is making money, turning the elderly into bewildered cash cows, milking them of every dime, dollar, and ounce of dignity. The beneficiaries are the caregivers, the medical profession, and the pharmaceutical giants, those who have a vested interested in putting in the cannula and the drips and keeping their medicated and vegetative charges clutching to this mortal coil.

We should be ashamed, but our fear of death and obsession with longevity make it otherwise. An American comedian once suggested that his elderly grandparents become stuntmen in a martial-arts movie, arguing it was nobler for them to get their heads removed by a well-aimed roundhouse kick than to fade to grey nothingness in a care home.

“In extending life for the sake of it, we conspire to cheapen it and remove all meaning.”

Of course, luck and genetics play their part. Some elderly people do fine: Three of my great aunts were completing The Times” daily cryptic crossword until their deaths in their nineties, while a friend’s eighty-something father continues single-handedly tending his cattle and flock of six hundred sheep right through winter’s depths. They are an inspiration, but they are rare.

Sure, not every octogenarian wants to drag straw bales and sacks of animal feed through a snowdrift. But what society has opted for is the other extreme, where the sick and demented and doubly incontinent are maintained, patched up, and placed on life support as if a heartbeat at any cost is all that matters. The Who once sang of hoping to die before they got old. That same generation now expects to live way beyond old age, to defy death even if control and faculties are gone. Life”rather than quality of life”is the new tyranny.

It is why people have begun to take matters into their own hands, traveling to Switzerland’s Dignitas clinic to bring forward their passing. Many observers feel uneasy and squeamish at the concept of accelerating one’s departure via assisted suicide. Yet they remain strangely silent on the current practice of artificially sustaining existence beyond a reasonable term.