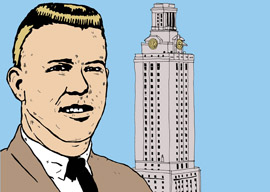 Mass shootings have been a recognized phenomenon in the US since Charles Whitman went up the tower at the U. of Texas with a rifle in 1966 and entered Baby Boomer lore.

That’s about as far back as I can remember, so I can”t tell you if these kinds of horrible events happened just as regularly before 1966. Those who have studied the question come to differing conclusions. For example, in 1927 a vengeful Michigan school-board treasurer blew up an elementary school, killing 38 students. But as spectacular as that must have been, that was before television allowed the entire country to watch news stories live. So the bomber didn”t become famous like Whitman. (That phase change in news coverage is one reason that Baby Boomers such as me naturally assume that history more or less began sometime between the JFK assassination and The Beatles.)

It’s possible that even more horrific mass murders are lost to history: Fires were major killers until not that long ago. For example, the 1958 fire that killed 92 students in Chicago’s Our Lady of Angels elementary school may have been the result of youthful arson.

Yet it’s also plausible that the general low level of crime seen from the mid-1930s to the mid-1960s included mass murders and that Charles Whitman really did mark a turning point.

We see something similar with serial killers. In his recent book Popular Crime, baseball statistician Bill James pointed out that the police didn”t much admit to the existence of the category of serial killer until Ted Bundy’s exploits in 1980. The press, public, and artists had become fascinated by the idea since the Boston Strangler in the mid-1960s, but cops mostly stuck to their training that random killers didn”t exist.

“Creeps who have been ignored because there is something wrong with them try to make themselves interesting with a gun.”

On the other hand, James’s research suggests that police hadn”t been that far off. He was able to identify a few early serial killers, but they were uncommon until late in the 1960s, when, as with so much else, things changed.

Why? I don”t know. One possible explanation for the spread of mass shooters is feedback effects. Perhaps the urge to be a star has expanded as the technology grew to accommodate it. In the song “James Dean,” the Eagles sang, “And I know my life would look all right if I could see it on the silver screen.” (More subtly, the true-crime genre of literature didn”t exist until Truman Capote’s famous 1966 book In Cold Blood.) Creeps who have been ignored because there is something wrong with them try to make themselves interesting with a gun.

Bill James states that after the tawdry media circus of the 1935 trial of the Lindbergh kidnapper, American press barons reached a gentleman’s agreement to improve the tone of their newspapers by mutually forswearing tabloid crime coverage. He argues that this lack of attention paid to crime helped American elites become liberal and unserious about the cost of crime, paving the way for the 1960s rise in crime.

On the other hand, this cartel against sensationalism may also have discouraged those who might have sought publicity through crime. If your murder spree would only get you below-the-fold coverage, well, maybe it wasn”t worth shooting all those innocent people after all. By the 1960s, though, the rise of live local TV news began to offer new avenues for the sort of fame Whitman pioneered.

The mass killers who become famous seem to generally be monsters of egotism. There are a lot of people with a lot of problems out there, but even shooters very, very rarely randomly kill large numbers in a bid for our attention.

In 2010 I read through all 2,600 homicides in Los Angeles County in the three preceding years. There were more than a few cases of a son killing his mother, then himself, but no cases of the killer shooting a few dozen schoolchildren in between. And there were numerous cases of what looked like suicide-by-cop, but many managed to accomplish this by just brandishing a weapon. For instance, the day after the latest massacre, a man tired of living in his car went to the expensive Fashion Island mall in Newport Beach, CA and fired 50 shots into the air or ground, not hitting anyone. (For once, Southern California cops managed to subdue a dangerous suspect without putting a few dozen slugs in him first.)

The good news is that mass murder’s various flavors get boring after a while. For instance, nobody goes postal anymore. Back in 2001, I had to cover an old-fashioned high-school shooting. I argued that it was just a copycat crime inspired by the excessive cable news coverage of all the other high-school shootings of the previous half-decade.

But almost immediately, high-school slaughters died out for years as even the little cretins who might have shot up their classmates figured out that Columbine had been the box-office peak, The Dark Knight of the series, and it was all downhill from there.

This symbiotic relationship between the mass media and mass murderers has many random elements, but some people are always on the lookout for a good case that can be used to push the agenda, which at the moment is gun control.