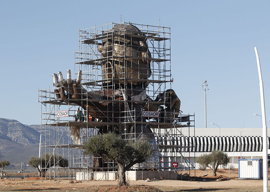 Spaniards alternate between rage and bewilderment as Europe lurches closer toward the currency implosion that will most likely vaporize Spain’s banking sector. Wasn”t it yesterday that the country boasted the EU’s second-highest growth rate?

Plenty of monuments still stand from that “growth” spurt: Airports without planes, museums without artwork, and prisons without prisoners. Spain is now filled with empty new monuments to empty old ideas.

A year after the ribbon ceremony, the airport at CastellÃ³n de la Plana remains boarded-up, unoccupied except for feral cats and yawning security guards, supposedly because the permits are held up in Madrid. Authorities have been unable to get a single airline or tour operator to commit to their airport.

Meanwhile, yearly maintenance is running upwards of 35 million euros. Roads accessing the main coastal highway have yet to be built, but live hawks and ferrets were acquired at a cost of 438,000 euros to prey on lesser birds that might fly into engine housings and cause nonexistent planes to crash. On the traffic circle outside the terminal, a bronze statue looking like a monstrous Mr. Potato Head toy rises 25 meters in the air.

The airport at Ciudad Real has a huge terminal and a four-kilometer runway to handle the world’s largest aircraft should the world’s largest aircraft ever need to land in Ciudad Real. The airport cost 1.1 billion euros, but the socialists who were running the show in the autonomous region of Castilla-La Mancha from 1983 until this past November didn”t want to look like pikers.

They built it big to accommodate an expected two million passengers yearly”a tad optimistic, given that Ciudad Real, left mostly to its own devices in La Mancha’s vast emptiness, has a population of 75,000. Even though they tried naming their airport “Madrid South,” the Spanish capital is over 200 kilometers away, high-speed trains are very expensive, and air travelers hate having to make extra connections.

Unlike the facility at CastellÃ³n, this airport actually got to open for business. With balance sheets padded by millions of euros in taxpayer subsidies, three low-cost and regional airlines flew out of here from 2008 until just after Easter Week this year, when huge yellow crosses were painted on the tarmac warning pilots not to land at what used to be “Don Quixote International Airport.”

Don Quixote, as you may recall, was insane.

Spain’s regional authorities have been more concerned with building lavish temples to contemporary art than with furnishing them with artwork. But if empty containers appeal to you, there is some outstanding architecture out there, such as the Santiago showpiece designed by Portugal’s Alvaro Siza or the building at LeÃ³n that playfully mimics tablets of watercolors in a paint box. Also worth examining is the problem-solving virtuosity of Es Baluard in Mallorca, a structure that seamlessly fuses with the sixteenth-century fortifications that rim Palma’s harbor.