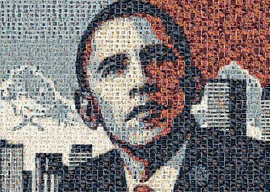 On January 30, the New York Post took a dig at Minnesota Congresswoman Michele Bachmann, who was accused of “rewriting history” by uttering the following statement about Black History Month:

“We know there was slavery that was still tolerated when the nation began. We know that it was evil and it was a scourge and a blot and a stain upon our history. But we also know that the very founders that wrote those documents worked tirelessly until slavery was no more in the United States.”

One may fault Michele for falsely attributing slavery’s abolition to the Constitution’s authors. These venerable gentlemen referred to slaves as non-free “persons” but decided not to jeopardize creating a federal union by outlawing an institution that they didn”t particularly relish. But this may be a case of the pot calling the kettle——-. (Especially during this penitential month, I wouldn”t dare to complete the last sentence.) Reading the Post on such intricate subjects as World War I, the Palestinian refugee problem, Abraham Lincoln’s deep humanity (tell that to the victims of Sherman’s March!), and MLK’s Thomistic reasoning, it seems that Michele might receive better historical instruction elsewhere.

Presumably the Minnesota lawmaker, who is beloved by the Tea Partiers, has not groveled frenetically enough about our racist past. Nor has she added certain doctrinal details to her description of our ongoing redemption from racism”a process that continues unfolding even now, during our holiest post-Christian liturgical month, which combines MLK worship with 28 straight days of intense focus on our past racist iniquities.

But why must this Republican grovel at all? Does she honestly think it will help her party exceed the tiny percentage of the black vote it’s presently getting? She’s a fool if she does. Unlike her pal Sarah Palin, Michele can turn words into coherent thoughts and seems able to think on her feet when asked difficult fiscal questions. I would guess there are multiple reasons why she loudly bewailed our blotting sin of slavery. One, like the students whom I teach, she knows squat about history except for certain clichÃ©s that seem to rumble about in Republican minds. America is the one exceptional, unique country because it is based on free enterprise and good “values” or some “single idea.” (Fill in the missing idea.) Unfortunately for our souls, before we got to where we are right now, we practiced racism, sexism, and other “evils.” But that’s OK as long as we confess our sins and promise to do better in a glorious future that combines fiscal accountability with social sensitivity.

“If Black History Month is to be more than an occasion for contrite whites to bleed all over the floor, why not provide a more balanced account of black history in the US?”

Another reason Michele made the dumb “blot” comment is that she’s an American Protestant. She belongs to a religion that has descended from its once-profound pessimism and emphasis on the individual sinner to a predictable combination of American exceptionalism and collective guilt. What James Kurth has characterized as the “Protestant Deformation” has taken its weirdest form in this country”and among our Republican politicians. Even without their neocon puppet-masters pushing them toward the social left and into madness internationally, the GOP leadership seems to be afraid that blacks have still not forgiven them”for what, God only knows. The Republicans have been accommodating blacks for decades with civil-rights acts, affirmative action, and speeches by Bush and McCain deploring American slavery and racism. What else can the Reps do to woo the unwilling?

I”ve also heard from establishment conservatives (when they dare to speak to me) that if Americans can be proud of their achievements (like letting in lots of immigrants), we should also own up to our failings, and this means declaring before the world that we once allowed slavery and practiced discrimination.

The problem is that we”ve already heard this stuff until it’s begun to come out of our ears. Why not round out this narrative with less-PC facts such as the one about how American blacks enjoy a far higher standard of living than blacks in any country under black rule (with the possible exception of Bermuda); that black slaves who remained under black slave-masters or who were sold to Arabs fared far worse than those who were dragged here; and that black violent-crime and illegitimate-birth rates vastly exceed those of other groups? If Black History Month is to be more than an occasion for contrite whites to bleed all over the floor, why not provide a more balanced account of black history in the US? This would involve more acts of personal responsibility by blacks and fewer acts of white contrition. As for Republicans, my hope is they would take tranquilizers before again addressing the blot on the national conscience. Psychiatric counseling might also help.