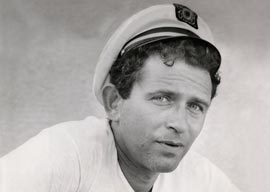 One of those self important, so called pundits once asked Norman Mailer if fascism was coming to America. The pompous one had once worked for Time magazine, so Norman answered him with a pun. “It’s going to be a Luce sort of fascism.” Mailer was always unpredictable and hard to pin down where ideology was concerned. I once introduced him to a beautiful Israeli woman who immediately asked him why he had never visited Israel. “Because they don”t all look like you,” said a smiling Norman. Although Jewish, Mailer was not a fan of right wing Israel. He particularly disliked Israeli extremists and was poignant when discussing the plight of the Palestinians. He referred to his politics as being of the radical conservative persuasion, but kept an open mind, something quite rare in the lofty intellectual circles in which he mixed. He was a good friend of William Buckley and had all sorts of nicknames for Pat Buckley, whom he adored and teased mercilessly. He was close to Elia Kazan, whom he considered the top, and I once had dinner with Norman and the Greek born director in the Mailer house and the only subject that came up was how yours truly could have his cake and eat it also, where marriage and women are concerned. Both Kazan and Mailer were great womanizers, so for once I listened to every word they said.

Dinners at the Mailer house in Brooklyn were terrific affairs because of the mix. Sometimes it was just Norris and Norman, my wife and I, and Larry McMurtry, author of Lonesome Dove, The Last Picture Show and other memorable works of small town America. One time Abe Rosenthal, then executive editor of the Times, complained to Norman that he couldn”t sit at the same dinner table with me because of the rude things I had written about him. (I only said that if he made love as badly as he wrote, I felt awfully sorry for his wife.) Norman moved me from Abe’s table and placed me next to him. If anything, it was a lesson in manners for Abie baby.

Mailer’s feuds, of course, were Homeric in scope and intensity. He famously punched Gore Vidal in Kay Graham’s house in Washington, and had crazed feminists shouting their heads off during televised debates. I always thought he made fools out of female polemicists like Germaine Greer and Betty Friedan, but then I never followed the debates. Anyone who had paid most of his hard earned money to alimony for five wives could not possibly have been a male chauvinist. And he wasn”t at all, except he wouldn”t take crap from silly feminists who were shrill but stupid in their criticism of macho Mailer.

His politics, then, would have been anathema to those censorious leftists and middlebrow novelists who are taken seriously nowadays by the likes of Michiko Kakutani and the other cultural vandals of the New York Times. I don”t think Norman worried too much about black transgender prisoners having a tough time in prison, although he was a great friend to black America. He had smelled a rat long before any of us who started The American Conservative.

When he was in Russia, researching Harlot’s Ghost, he spent an evening telling me that the Soviet Union was a busted flush and that we should be helping them, not isolating them. George Kennan said exactly the same after the Soviet collapse. But here we are, 25 years later, demonizing Putin and encircling him with NATO. Three weeks after launching TAC, I went up to Provincetown for an interview that had Norman on the cover of our third issue. He said word by word the same thing as Pat Buchanan: We are a republic, not an empire. He predicted Iraq would be the greatest mistake ever and would unleash wars all over the place. Obviously, the venal Fifth columnists in Washington weren”t best pleased. (Gore Vidal had just left his house, having stayed for one week as a guest. They agreed on the Iraq war’s folly.)

Norman knew all about the pretense of journalistic objectivity, the current media climate of polarized punditry and partisan spin. His books were automatically panned by women reviewers in the Times. Along with Noam Chomsky, Norman exposed how the dominant culture asserts its hegemony through a corporatized media whose credibility derives from its pretense of objectivity. What I loved about him was that many of these slimy types who are today’s cultural regulators, were physically afraid of Norman. Political correctness could not protect the pundit if he overstepped the mark. A head-butt by Mailer concentrates the mind awfully quickly. What the world needs, especially Washington, is more Mailer and less of censorious and malodorous liberals.