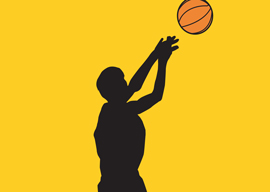 As you”ll recall, NBA team owner Donald Sterling was recently purged for being secretly taped objecting to his self-promoting mistress posting pictures online of the black superstars she consorts with in his absence. Sterling vowed to get vengeance by digging up the private remarks of other NBA owners on race.

Now Bruce Levenson, the controlling owner of the Atlanta Hawks, has announced he will sell his stake in that floundering franchise as self-punishment for writing a 2012 memo about how to attract more white fans to Hawks games. Is this Sterling’s revenge?

Last spring’s Sterling brouhaha was a Tom Wolfe novel come to life: an elderly, egomaniacal real estate billionaire, after a lifetime of out-conniving everybody, is outmaneuvered by his youngish mistress into objecting to her posting Instagram pictures of herself cavorting with famous black athletes.

In reality, Sterling was simply expressing the jealous old fool’s traditional lament, classically stated by Ovid around 16 B.C. in “To His Mistress:”

“Or it’s quite possible that Levenson decided to pull the rip cord and self-purge at a market peak for delusional rich guys who can”t imagine they would ever get in trouble for racial insensitivity.”

Since you are lovely, I know, of course that I can”t stop you from cheating;”¨All that I hope for, at best, is not to know when you do. …

Let my folly enjoy all of its ignorant bliss.

But it was An Important Teaching Moment About Race, so no such literary perspective was permitted. The funniest thing the Sterling affair showed us about contemporary America was that almost nobody noticed how funny it all was. We were shocked, shocked to hear an NBA owner objecting to his courtesan consorting publicly with black swordsmen like slugger Matt Kemp and the HIV-positive Magic Johnson.

The ongoing rise in bizarre moral panics over white racism is what happens when you combine the racial hysteria that’s setting in among liberals five years into the Obama Age with a technological evolution that puts everything on your permanent record.

I”d love to believe that a vengeful Sterling has deployed a team of trench-coated private eyes and ethics-challenged lawyers to publicize how hypocritical his co-owners are by exposing their race-related “gaffes.”

(There is little evidence of hostility toward blacks in the memo by Levenson. Indeed, the Washington, D.C.-based tycoon’s report is more of a rant against Southern whites for not being comfortable around the hip-hop culture that prevails inside his Atlanta arena.)

More likely, however, is the suggestion by Sterling’s lawyer Bobby Samini that NBA Commissioner Adam Silver:

… has established a precedent and the precedent is this: If you have any information that’s damaging to an N.B.A. team, it’s worth something. It’s probably part of some shakedown scheme.

Or it could be backstabbing among the consortium of co-owners.

Or it’s quite possible that Levenson decided to pull the rip cord and self-purge at a market peak for delusional rich guys who can”t imagine they would ever get in trouble for racial insensitivity. When Sterling’s wife had him declared senile, she sold his Los Angeles Clippers franchise to former Microsoft CEO Steve Ballmer. He paid a megalomaniacal two billion dollars, almost four times what any previous basketball team had fetched.

So far, egotists like Ballmer still believe that this could never happen to them. National freak-outs over white racism only happen to evil white men like Sterling, not to cool dudes like, me, Steve Ballmer.  (Here’s a classic video of just how cool Ballmer is.) Besides, Ballmer figures he’s got plenty of goodwill built up after the triumph of Windows Vista. He”ll never get old and lose a step like Sterling did.

Indeed, Levenson tried in 2011 to dump the Hawks, who are weighted down, as he pointed out in his infamous memo, by a heavily black fan base that, he was so insensitive as to notice, tends to arrive late for games, is too cool to cheer for the home team, can”t afford to spend much on season tickets or merchandise, doesn”t bring their sons often, and makes wealthier white fans feel out of place and unwanted at home games, especially in the arena’s lucrative bars.

Although the Hawks slipped to 38-44 last year, they had enjoyed five straight winning seasons before then. They aren”t a bad team (although the roster is bereft of big names), but they are a bad franchise. They were third worst in the league last season in attendance; around 23% of seats go unfilled, which is a lot in a big market like Atlanta.

Hawks season tickets start at a remarkably reasonable $14 per game. Atlanta is fairly comparable as a corporate crossroads to Dallas (with a higher proportion of blacks), but the Mavericks” season tickets begin at about $30 each. According to Forbes, the Atlanta Hawks” gate receipts are only $20 million per year compared to the $35 million generated by the Nuggets in the much less populous Denver area.

The sad thing is that the Atlanta area, which attracts numerous educated blacks, is about as good as it gets for black-white equality in 21st-century America. In contrast to Detroit or Washington, D.C., where black mayors often acted out of sheer racist spite, Atlanta’s black political leadership has traditionally been willing to cut deals with the area’s white corporate bosses that benefit both races. (In general, blacks seem to do better in red states like Georgia.)

If I were a black college graduate and wanted my children to grow up around the offspring of other black college graduates, I”d seriously consider moving to Atlanta. The region attracts educated blacks because the Greater Atlanta area is an airline hub with many big corporations. The local economy isn”t particularly entrepreneurial; but then African-Americans aren”t very entrepreneurial. They tend to do best in large, already well-organized institutions such as the U.S. Army or the Coca-Cola Corporation.

Atlanta is as good as it gets for blacks, but that’s not enough for a big money team.