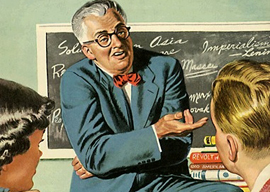 I’ve recently started recovering from forty years among pseudo-academic weirdos in the collegiate loony bin. One persistent aspect of modern college life is its obvious loathing for anything that smacks of Christianity. This includes whiting out Christian symbols and references to Christian holidays from the academic landscape. In the fall of 2006, a bronze cross was carted out of Wren Chapel at William and Mary lest it cause offense to unidentified spectators. Faculty members I’ve had the misfortune of knowing usually vibrate with excitement at such displays of sensitivity, and whenever the possibility exists for replacing “Christmas greetings” with “Have a blessed Kwanzaa,” “Peace to you on Ramadan,” or an inspirational listing of white racist sins, academics will run to make this happen. Staff members once changed a “Yule Bowl Party” to a “Season’s Greeting Festival,” arguing that “Yule” references were an affront to non-Westerners. Perhaps an itinerant Hindu would wander into the gathering and go bonkers at the mention of something once associated with Christianity.

This reaching out to other cultures while pushing away the host culture took a particularly bizarre form at a nearby college about fifteen years ago when a Protestant chapel was being built. Plans had been made to crown the newly constructed steeple with a simple cross to indicate a Christian house of worship at what was then a quasi-denominational institution. But this was not permitted to transpire because a Jewish faculty member protested mightily against the blood-curdling symbol. It seems the cross reminded her of the Holocaust, an association that is perhaps understandable given that authors who are abundantly present in college libraries always make the same dubious connection. The proper answer in this instance would have been to tell the employee to look elsewhere for a job if she found Christian symbols so intolerable. Instead, the “cross was reconsidered”—that is, replaced by a less offensive spherical object.

“Although a hater of Christian sentimentality, he would melt into sappy tenderness at the very mention of a designated victim group.”

More recently at the same institution, a memorial service was performed for a former college president who from all accounts was a conventional Protestant churchgoer. A college chaplain was on hand to offer a prayer, but before she began, she fitfully apologized to the attendees. She had planned to offer a non-denominational prayer but was afraid her words might offend someone who wasn’t quite cool with appeals to an Occidental God. With visible discomfort she looked around before mumbling her invocation. Perhaps she was scared the Holocaust Lady would show up and report her to some government agency.

My sister-in-law tells me about a meeting she attended at the English-Speaking Union, where the group announced it would not convene the following week because of Rosh Hashanah. My sister-in-law looked around at the craggy, longish English faces and wondered, “Cui bono?”—for whose benefit was the announcement being made? Perhaps the members were concerned that the Holocaust Lady would show up there as well.

Meddlesome nudnik that she was, Holocaust Lady had a set-to about fifteen years ago with a trendy male religion professor who came into her building (in a sense it was hers by right of bullying) wearing a swastika on his chest. The swastika-attired professor was calling attention to the folk culture of Native Americans, who apparently fancied the same symbol Hitler chose for his Thousand Year Reich. When the two met in the hall, it became a question of whose victim claims would prevail—the perpetually outraged Holocaust victim-by-proxy or the German Protestant who wished to save Native Americans from cultural genocide. Loud shrieking ensued until the celebrant of Native Americana agreed to strip himself of his ancient symbol of Susquehannock tribal life.