Mortal Combat From a Feminine Perspective 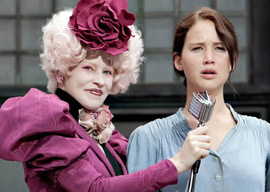 As female authors increasingly dominate popular fiction, they are confronted with whether or not to try and appeal to the remnant male market. The authors of this century’s three biggest “young adult” series (and wildly profitable movie adaptations)”Harry Potter, Twilight, and The Hunger Games“have employed three different strategies.

Joanna Rowling made a boy her hero, and to fool the he-man girlz-hater element, she took the pen name J. K. Rowling. (When one of my small sons discovered that he”d been fooled into reading three books by a lady, he stopped reading Harry Potter in disgust.) Despite Rowling’s gifts, by the end of her remarkable series her most passionate fans were largely girls.

In contrast, with Twilight, the less crafty Stephenie Meyer didn”t bother, creating a woozy world of estrogen-driven emotion where Bella barely does anything except smell nice and try to make up her mind which smitten beau to choose. Twilight is the ultimate in women’s liberation, the feminine mind wholly unshackled from masculine modes of thought such as rationality.

“The reason for all the different theories about the movie’s subtext is because it doesn”t have one.”

In The Hunger Games, Suzanne Collins tries to split the difference by making her protagonist a girl who fights. Collins gropes for masculine gravitas by attempting to channel her military historian father’s tales of hunting for dinner during the Depression and his nightmares from serving in Vietnam.

This has proved vastly successful. The screen adaptation of Collins’s dystopian soft sci-fi novel enjoyed a $153-million opening weekend, the third-highest ever. And more than just fanatical tween girls turned out. The opening-weekend crowd was two-fifths male, double that of the last Twilight installment. A majority of the audience was over age 25, and the grown-ups gave the movie a CinemaScore rating of A.

Critics are raving, especially over how Katniss Everdeen is a strong, empowered female character. Political pundits are competing to interpret The Hunger Games as a Democrat or Republican allegory.

So what is the film about?

The Hunger Games addresses today’s most burning social issues: Would a reality-TV show that forces boys and girls to hunt down and slaughter each other with edged weapons be a good idea? Should America switch to a totalitarian dictatorship in which the decadent Capitol economically exploits the twelve starving Districts and annually demands two children from each as “tributes” to compete in “Hunger Games” where 23 of the 24 will die horribly?