Apart from “rogue” politicians like Geert Wilders, Europeans leaders seem only willing to speak of the problem of dismal birth rates in the Old World by resorting to euphemism and wishful thinking. Faced with its disastrous postcolonial migration policies, the guilt-ridden establishment is only interested in maintaining domestic peace and order, when (not if) Europeans become ethnic minorities in their own lands.

It hasn”t always been this way.  Modern European states, both democratic and authoritarian, have periodically attempted to boost indigenous population growth, especially after manmade catastrophes. France did it after the First World War and the USSR after the Second.

The USSR’s pro-natalist experience hasn”t been forgotten. What today’s Russia shares with “Europe-proper” is a quasi-colonial past and a poor demographic present. However, rather than mimicking Europe’s defeatism, the Russian government not only took the proverbial bull by the horns, but also forced it to mate! 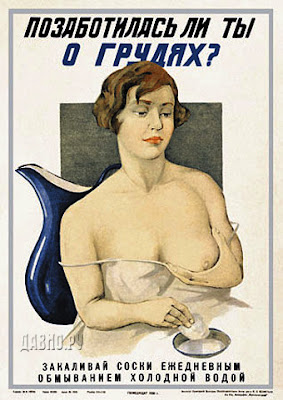 The Soviet Union is peculiar case study because its social policy rapidly changed in the first decades of its existence. Immediately after the Bolshevik takeover, the state tried to closely adhere to Marxist ideology by legalizing abortion, establishing simpler divorce procedures, and promoting the “new woman,” among other measures. Certain hardcore communist feminists like Alexandra Kollontai rejected morality altogether. However, by and large, people avoided this adventurism and chose to preserve families as socio-economic units.

If the 1920s were a failed attempt to implement Marxist immorality, then the 1930s demonstrated a successful turn toward social conservatism. Abortion was banned, and divorce became more difficult to obtain. The government began rewarding women with multiple children—the so-called “heroic mothers,” who rescued the nation after the fertility drop as a result of collectivization, industrialization, and consequent famines.

Soviet “public service” posters reflected these changes. One 1930 advertisment, for example, urged women to take care of their breasts. A more subtle 1934 poster emphasized honest peasant labor by depicting a happy nuclear Slavic family. After 1945, the government attempted to make up for the near thirty-million population loss due to war and labor camps. And so, posters like “Grow, warrior! The Soviet Army protects you!” were used, featuring a blond Slavic baby underneath the red Communist flag. 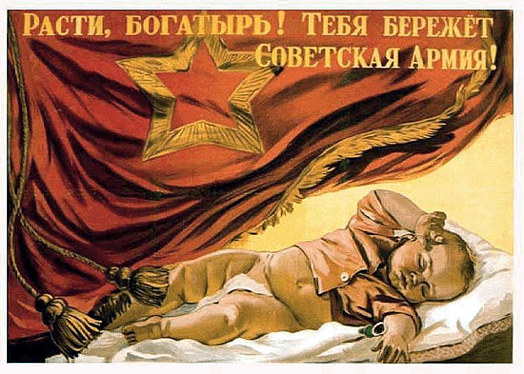 Beautiful blond Slavic babies appear in contemporary Russian pro-natalist advertising, too. It emerged in May of 2006, when Vladimir Putin had made Russia’s demographic crisis problem Number One. A year prior, the net human decrease in this country amounted to an alarming six hundred thousand people.  At this rate, Russia is projected to lose 11 million people by 2025.  Not unlike the case of “heroic mothers” of the past, he proposed to reverse depopulation pragmatically: better social services for new mothers, additional funding for multi-child families, a substantial amount of capital in the form of investments into children’s future education, and so on.

Putin’s critics immediately suggested that women might start reproducing out of greed, and they argued that Putin’s programs would lead to misleading short-term population boosts. Furthermore, they urged the government to address the poor health of the aging population, particularly men, whose life expectancy is at least a decade less than that of men in Western Europe and North America.

In 2008, Russia’s pro-natalism resulted in record birth rates—the highest since the Soviet Union’s collapse. However, while these measures have been covered by the media, two crucial aspects of Putin’s plan have been consistently ignored. First, this plan involves a significant cultural initiative which feeds into Russian traditions and contemporary advertising methods alike. Most important, this plan specifically targets people of European descent.

My temporary relocation to Moscow to conduct dissertation research has given me the opportunity to observe this sweeping initiative “live.” In general, the state offers its citizens cultural celebrations, secular federal and Eastern Orthodox Christian holidays, soccer matches, city jubilees, historic blockbuster films, military parades—all in the name of the Motherland.  Russians are left with a sense of a glorious past—the kind of past that Western and American academic and government institutions are constantly telling us is outdated and oppressive.

More specifically, Russians are also rather conservative when it comes to marriage and children, despite the high divorce rate. So, it’s not surprising that the subjects of demographics, child rearing, a woman’s traditional role in the home, and even adoptions and surrogate motherhood receive extensive coverage in countless television miniseries, soaps, silly gossip talk shows, serious political programs, and “public service” advertising on major state-funded channels.  For example, eligible bachelorettes and bachelors on a popular award-winning show “Let’s Get Married!” on state channel 1 systematically mention a multi-child family as their primary goal for resorting to television dating.

Yet, the most explicit pro-natalist messages appear within the confines of the 75-year old architectural wonder of the world—the Moscow metro system. This type of advertising grabs the attention of over six million people (90% of users), according to the recent study conducted by TNS Gallup Media.  Long escalator rides deep underground and even longer commutes across the city make billboards on walls and posters inside trains simply unavoidable.

Another billboard is a photograph of good-looking European grandparents, parents, and children enjoying the outdoors together and captioned with, “”Family is one of nature’s masterpieces”—Philosopher George Santayana.” The most distinct feature of both ads is the fact that they don”t simply depict happy nuclear families, but, rather, emphasize genetic and historic continuity through multi-generational family “clans.”

The most overt image in this campaign states that “The country needs our records. Every minute, three people are born in Russia” and shows a young Slavic woman holding three blond, blue-eyed babies. While enormous Moscow is quite multiethnic, here, too, the government’s demographic target market is very clear.

Whether this country’s current pro-natalist experiment, in conjunction with the recent anti-alcohol and anti-smoking campaigns, achieves significant results remains to be seen. But for those concerned with the “Death of West,” some comfort can be found in the fact that what is taboo in western Europe and America is a national priority in the Motherland.