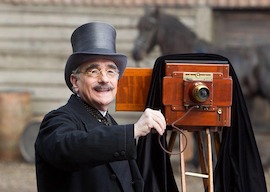 NEW YORK—Last week a $57 million movie flopped and the director apologized. He didn’t just apologize, he kind of humiliated himself publicly.

Is this the beginning of a Reparations Movement for predatory directors who steal our time? If so, I’m waiting on Michael Mann’s apology for Blackhat. Unfortunately, when an American director pisses away $70 million, he doesn’t say “I’m sorry,” he releases a director’s cut! That’s what Michael Mann did. “Here’s the movie they wouldn’t let me make.” Then, when nobody liked that one either, “I’m going back to the indie world where I can realize my full vision.”

This is the way it’s done. We probably shouldn’t mess with a hundred years of Hollywood history.

Of course, the $57 million mistake movie I’m talking about was made in Chinawood. It’s called Shanghai Fortress, and it’s about some youthful elite warriors who defend the world against alien invaders. It looks a little like Starship Troopers, which should have been a tip-off to the Chinese producers. Paul Verhoeven spent $100 million on that movie, and even though it’s popular with just about everyone I know, it still hasn’t made its investment back after 22 years.

So here’s what the guy should have said: “We were trying to do Starship Troopers with an Asian twist because we had the two Eastern versions of Casper Van Dien and Denise Richards. Once we had that casting, we had to go with it.”

In other words, turn it into a high-level studio meeting kinda thing.

And actually that’s true. The stars of Shanghai Fortress are Shu Qi and Lu Han. Shu Qi is a Taiwanese babe, just like Denise Richards, and Lu Han is a pop idol. He looks to be about 8 years old, which kind of cuts down on the eroticism of the love story, but hey, it worked for Titanic! Everyone is panning Shanghai Fortress for not using classically trained Asian actors, but I don’t see Denise Richards or Casper Van Dien doing Shakespeare in the Park, if you know what I mean and I think you do.

“When an American director pisses away $70 million, he doesn’t say ‘I’m sorry,’ he releases a director’s cut!”

Anyway, here’s what Teng Huatao, the director, said after the abysmal weekend grosses:

In the past, there were members of the audience who didn’t like my movies.

Okay, Teng, I’m interrupting you right there. Bad start. When you have a stinker on your résumé, that movie ceases to exist. Somebody at the Beijing Film Academy was supposed to tell you this.

But their criticism was always aimed at the movies themselves. But today I saw that some internet users are saying, ‘The Wandering Earth’ opened the door to Chinese science fiction and ‘Shanghai Fortress’ closed it.

Oh my God, three sentences in and he’s already buried himself. Never mention someone else’s film that’s more beloved than your own turkey! Fifty-seven mil is nothing! There are studios that flush that much down the toilet five times a year! You should have gone with the “still trying to find its audience” line. That would have put the whole thing in limbo. Now you’re saying, “Well, I screwed the pooch.”

I am very saddened.

Teng! You can’t be saddened. You have to be all about “I make movies for me and it gives me great joy when people are entertained by them.” This is where you do “true to my vision” stuff.

This showed not only their dissatisfaction with the movie, but that their hopes for Chinese sci-fi were dashed. As the director, I have ultimate responsibility for this. I am very sorry.

Oh. My. God. Do you have no friends who could have talked you out of this? Do you not realize that “Chinese sci-fi” is not even a thing? That it’s a made-up concept like “Scandinavian crime drama”?

Is there some secret reason you did this? Are they gonna put you in jail or something? I have to assume some of that $57 million came from the government, because in China almost everything comes from the government, but I don’t think they look at the grosses and send you to Qincheng Prison and cause your wife to start writing letters to Amnesty International.

But really, if we’ve entered a new era where directors can be stretched on the rack for wasting budgets, then I want my vengeance. Timur Bekmambetov, I’m talking to you.

I had barely recovered from Abraham Lincoln: Vampire Hunter, which cost only $69 million, when they gave you that $100 million Ben-Hur remake where you strapped the GoPro cameras onto the horses. It took not one but two studios, both Paramount and MGM, to decide one of the most famous stories about Jesus should be made by a Kazakh who grew up in the Soviet Union, so yeah, you’ve got excuses, but I mean, come on, man, 125 minutes of togas and sandals and you can’t even deliver on the chariot race? I expect a full and formal apology, the way they did it in the heyday of Stalin.

Okay, your turn, Marcus Nispel. I didn’t say a word when you remade the greatest movie in the history of the world, The Texas Chain Saw Massacre, and you managed to get away with that by spending $9.2 million on a script that originally cost $50,000 back in 1973. So you get a pass because you had 184 times more budget than the original, and that meant people did not hate the result and the movie made $81 million.

But Conan the Barbarian is a different matter. You should be hauled into court and forced to repay every cent of that $110 million, and Jason Momoa should be required to bring you clean socks every day should you fall behind and get sentenced to Fantasy Remake Jail, but I’ll settle for a lengthy humiliating public apology. This would not include any remarks about what you were trying to do. If you utter the words “the art of Frank Frazetta” at any moment, you will be executed.

Cowboys and Aliens. Jon Favreau, the Iron Man films atone for many sins, but you need to bleed for that $100 million.

Paul Feig, there’s a special place in Remake Hell for the man who destroys the beloved Ghostbusters franchise with $163 million of Universal’s cash. You’re going to get additional time in Purgatory for saying you’re proud that the film won an award. That award was the Nickelodeon prize awarded by children! Have you no shame?

Joe Johnston, I’m going to assume you were shocked by the phone call from Universal awarding you the director’s gig on the $150 million Wolfman remake because, yeah, those Honey, I Shrunk the Kids credits don’t really transfer. But since you used the lamest reasoning ever during the postmortem—the old “I was called in at the last minute on a troubled project” excuse—I’m sorry, but we need you to be flayed forty times in the public square of your choice.

Or we could just ignore Teng Huatao and go back to the old way of doing things, which is to wait twenty years until your movie becomes “an underrated cult favorite.” Then you can hit the convention circuit, have a cast reunion, and show your family that your movie was “ahead of its time.”

Or you can do what Martin Scorsese does. He made a movie called Hugo that was budgeted at $100 million and went over another $80 million. Nobody went to Hugo. Nobody who did go to Hugo will ever go to it again. Nobody cares about Hugo. But here’s why Martin Scorsese will never have to apologize for spending the money:

Plus only twelve more years until it becomes a forgotten gem.