Mr. Abbas Goes to the UN 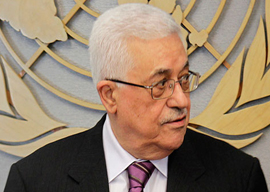 The protracted Mideast “peace process” has finally hit the Iron Wall. The Palestinian Authority’s president, Mahmoud Abbas, has wandered off the reservation and is taking the Palestinian question to the UN.

Aside from providing a convenient diplomatic cover for military occupation, the “peace process” has resulted in half a million fanatical Jewish “settlers” imposed on the West Bank, complementing the Israeli annexation of Arab Jerusalem and the Syrian Golan Heights. Real-estate and water rights have been expropriated from occupied Palestine to accommodate the “settlers” from Brooklyn, the former Soviet Union, and the four corners of the globe. In plain language, this is called theft. It has been ongoing since 1948. In addition, the gentlemen in Jerusalem have built a concrete wall higher and longer than the Berlin Wall to encase the West Bank. Gaza remains blockaded.

Washington now euphemistically refers to such unilateral acts by the occupying power—illegal under international law—as “facts on the ground” which the Palestinians must condone or else be deemed terrorists. To a remarkable extent, the US Congress and tax-deductible contributions from America have paid for these operations.

“Evidently, Abbas has grown weary of being treated like a stooge and having little to show for it.”

This prolonged scam began for the Palestinians under Yasser Arafat’s leadership and is ending with Abbas. Washington summarily jettisoned Arafat in July 2000 as soon as he failed to accept the Camp David diktat proffered by Bill Clinton and Israel’s lawyers Dennis Ross and Martin Indyk, acting in concert with Israel’s slippery Prime Minister, Ehud Barak. Clinton blamed the summit’s blowup entirely on the hapless Arafat. Bill and Hillary washed their hands lickety-split of the whole affair, managing to keep their pro-Israel credentials intact and their post-White House career prospects alive.

On Ariel Sharon and Dick Cheney’s advice, G. W. Bush refused even to pick up the phone and talk to Arafat. In thrall to the neocons, he outsourced America’s entire Mideast policy to Ariel Sharon until Sharon suffered a stroke, which left him in a coma. After being feted in Washington for almost a decade, Arafat ended his days under siege at his ramshackle Ramallah compound, where he died a broken man under mysterious circumstances in 2004.

Arafat was either a victim of the “war on terror” or a target of Ariel Sharon’s war of terror. Arafat’s deputy, the colorless and mild-mannered Abbas, took over the leadership of Fatah and the Palestinian Authority. He was rebuffed in his attempts to negotiate.

G. W. Bush and Condoleezza Rice hit upon the idea that the Palestinians should have an election. The election took place in 2006, monitored by former US President Jimmy Carter and others. Hamas won big in both the West Bank and in Gaza. Carter enthused about an “honest, fair, and safe election process” and said “we were all surprised at the enormity of the Hamas victory.” Washington refused to accept the outcome. Bush jettisoned Hamas. Washington and Jerusalem would henceforth only deal with Mahmoud Abbas.